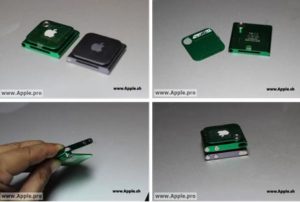 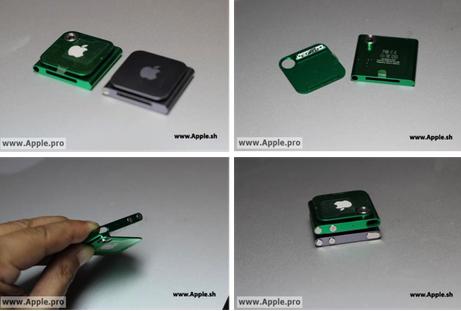 In April last year, the iPod Nano integrated camera sensor has appeared but did not have very much information. Now MIC Gadget.com has launched a number of new images on the iPod Nano Gen 7 with 1.3 megapixel camera on the back of the product. In addition to film-like camera on the iPod Nano 5th generation , this camera can capture it. A hole in the grip of the iPod Nano will help see through the camera and activities. In May last, Apple has a patent related to the iPod Nano revealed that will feature a camera, video camera integrated in the iPod Nano in the future. The source  said that the current leakage of products not yet in production but perhaps it will be introduced this year.

As regards the seventh generation iPod Nano with camera, from plant sources Apple’s manufacturing site for news MIC Gadget says that the camera on the iPod Nano is a mistake. All pictures taken are overexposed. The problem lies with Apple not optimal aperture of the camera. Two months ago, a sample was also the same. The source also added that Apple has tested 2 megapixel camera on the iPod Nano but the results are not as comments, pictures looked pale and “pretty flat”. However, the interface to the machine was completed and will be put into mass production as soon as Apple overcome the above problems. You probably will be sold in the first quarter or early second quarter of this year and did not follow the rules of product upgrades once a year as the previous iPod Nano. New images of the seventh generation Ipod Nano with camera patent in May leak in Apple’s files revealed in April last year

Via: MIC Gadget
Spread the love