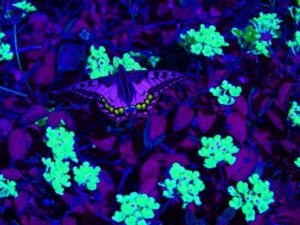 Some may even know what exactly changes in the visual perception of a snake, cow or turtle. Knowing in words is sometimes not enough, so we invite you to see everything with your own eyes!

Mice are rather poor at seeing what is happening at great distances. In addition, they are able to distinguish well only moving objects, and stationary ones may not notice at all until they rest their nose on them.

The visual perception of snakes is different during daylight hours and at night. If at night they are able to distinguish between warm zones, then during the day the snake reacts exclusively to sudden movements. Therefore, if during the day a potential victim freezes at the sight of a snake, it is quite possible that she will not even notice it.

For a fly, our entire world appears to be a huge mosaic, because each facet on the eye of this insect perceives only one part of the image. On the other hand, the fly distinguishes well the flickering of light with a frequency of up to 300 Hz (the limiting frequency of the human gaze is 50 Hz), so when you try to slap the annoying fly, it sees you as if in slow motion and always has time to leave in time.

The turtle’s vision is not distinguished by increased clarity, however, this reptile is able to easily distinguish red-yellow colors, while it does not see blue-violet shades at all.

Most spiders have poor vision and are able to distinguish only a small play of light and shadow, as well as movement within the web. The exception is the jumping spider. They are able to perfectly see the picture, almost like a person and even more. In addition to what is happening in front of their eyes, these spiders are also able to see the picture on the sides, and even behind them.

Judging by the picture in front of your eyes, it is easy to conclude that the snails are seeing … nothing. However, many scientists are not sure about this, and to this day they are trying to find information about whether snails can see or still not. But in general, we are inclined to believe that if snails see, then it is extremely bad and not clear.

The colorful and motley world for cows is limited to only orange and yellow flowers, so these animals, alas, cannot see fresh green grass.

Since the horse’s eyes are located far from each other, it sees, as it were, two halves of the world, separated by a line (that is, by its nose). In addition, all horses see the world in black and white and are able to distinguish much more shades of these gradations than humans.

The frog is only able to distinguish between moving objects. Moreover, if the object is large, it will simply run away, and if it is small, it will catch it and take it for food. The sadness is that if the objects are static, the frog will not notice them at all and may starve to death when there is a huge variety of food in front of its nose.

“Eagle Vision” is not just a fiction, but a confirmed fact. In addition to the fact that these birds of prey are able to see the world much brighter and clearer than humans, they are also able to focus on two different objects at once. In addition, the eagle is able to see the victim even from a very long distance.

The eyes of a thrush work on the principle of “binoculars”, that is, it can magnify the image. In addition, the blackbird is also able to focus well. And on two objects at once! Therefore, a cat who decides to hunt for a “bird” has almost no chance to escape.