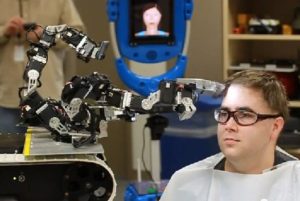 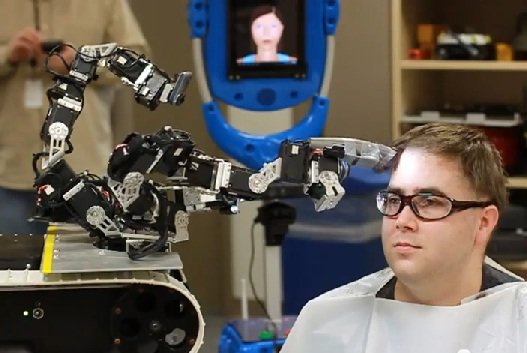 Engineers at Intelligent Automation Inc. (IAI), specializing in artificial intelligence systems, tested an unusual robot. A car with three legs for a time became a barber and trimmed volunteer.

The robot, called Multi-Arm Unmanned Ground Vehicle was originally designed to be application-specific functions. According to the designers, the machine is able to handle simple locksmith tools, tie knots, pick locks on doors and inspect inaccessible areas.

The main design feature of the machine are its three limbs on hinges to a large degree of freedom. In theory, these limbs are able to perform more functions than the human hand, but in practice before that was quite far away.

During testing, the robot did not act independently, and controlled by the operator. The fact that the tested manipulator system itself, rather than artificial intelligence machines.Robot with a trimmer to shave his head was experimental, that’s just the result recalled more punk hairstyle, rather than the work of a professional hairdresser. Scissors robot is not trusted – that would be too dangerous to test.

Nevertheless, the engineers were satisfied with the test, noting that the design of robot manipulators would fully shaved man, but the whole process would take too much time.

Wavy hairstyle: The Most Favorite Hair Style of Stars

What Makes A Bride More Photogenic?