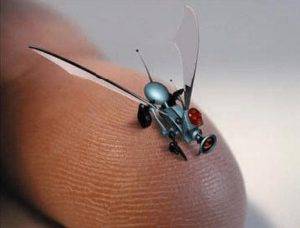 Nanomachine, nanogenerator, nanoelectronics – but most of all, the innovations relate to the field of nanomedicine.

The most interesting developments (till now) in nanotechnologies in are:

Researchers from the University of Groningen in the Netherlands and the Swiss Research Laboratory of Materials Science and Technology created a prototype of nano-sized car. It is a large molecule with four symmetrical elements that play a role of the wheels. Moves it to the electrical charge coming from the probe electron microscope. Nanomachine the size of 4 to 2 nm is placed on a copper substrate and charged by current from a probe placed over it an electron microscope. Flowing from the probe electrons cause structural changes in the motor cells of the molecule and cause them to rotate. They rotate in one direction only, so that reversing a nanomobilya not.

Scientists from the University of Texas at Dallas have invented the invisibility cloak, using the principle of a natural phenomenon – a mirage. Mirage in nature there is a very large vertical temperature gradient (drop it from a height) over a superheated flat surface, often desert.The light rays are refracted at the boundary between dramatically different density layers of air. The new material is created on the basis of graphene has properties that cause a similar phenomenon. In this invisibility can be switched on and off, sending an electric current on nanomaterials.

Researchers from Japan and Switzerland have demonstrated the ability to associate with each of the individual molecules by means of conductive molecular nanowires. As the initial substrate, they took monolayer films of diacetylene, deposited on a graphite substrate.Then it struck a small amount of phthalocyanine, from which on the surface of the substrate formed nanoclusters. The final stage of the researchers moved the probe scanning tunneling microscope for single molecule of phthalocyanine and by submitting to the pulsating voltage probe, initiated chain polymerization of diacetylene, resulting in a polymer nanowire, which can make it to another molecule of phthalocyanine. According to the creators, the scheme will operate as a diode.

The staff at Stanford University announced the establishment of a functional model of the synapse (the contact between neurons) based on material with a slight phase change. Such materials are often used in the design of the memory elements. The values of “0” and “1” in this case are encoded by different levels of resistance, which you can switch between, giving electrical pulses that heat the material and cause the phase transformation. With a high resistance amorphous state of matter, and low passes in the crystal. Scientists managed to achieve an order of magnitude higher resistance to the difference in the two states, which was a prerequisite for modeling the synapse and, as subsequent experiments, the scheme based on the nodes of such a substance really works like a fragment of a grid of neurons.

Researchers at the Georgia Institute of Technology have developed two types of nanogenerators placed into the polymer. Each of them is a stack of thin sheets, connected by nanowires of piezoelectric zinc oxide thickness of several hundred nanometers. In one prototype of the space between the nanowires is filled with plastic, and the entire structure is placed between two plates of conductive material. With a little compression it generates a voltage about 0.24 V. Another oscillator contains more nanowires and produces 1.26 V, ie close to the voltage of a standard battery or a rechargeable battery.

Scientists from Stanford University have developed a biosensor chip, which allows to diagnose cancer at early stages. It is based on magnetic detection and can detect cancer biomarker protein at a concentration of one to one hundred billion (ie 30 molecules per cubic millimeter of blood). This sensor is almost a thousand times more sensitive than currently in use diagnostic technology the initial stages of tumor development, researchers say. In addition, his work is equally effective in any biological fluid, in which doctors must determine the location of cancer biomarkers – in saliva, plasma, serum, urine, or lymph.Efficiency nanosensornogo chip was confirmed by experiments on mice.

Korean scientists announced the development of new technology the management of medical microrobots in the human body. Moving with the flow of blood, micro-machines could perform the most complex work, to deliver drugs to kill cancer cells and bacteria that break down blood clots and other entities to which it is impossible to get any other way.However, the present problem is not only the construction of some units microbots, and management.

Researchers from South Korea proposed the use of an external magnetic field to create two different types of movements nanorobot “screw” or corkscrew-like and progressive. In the first case, the robot can move forward / backward and “drill” or otherwise destroy blood clots. In the second – to fold into the desired blood vessel at the site of branching arteries and perform other maneuvers associated with the movement in the circulatory system.During the tests carried out in mock blood vessel filled with water, scientists have confirmed the effectiveness of this method of control microrobots.

Organs for transplant can grow as a piece of skin in a petri dish, they need the bulk matrix, a kind of framework for growth. But scientists at Rice University have proposed a completely different way – to grow organs in a suspended position by a magnetic field. With the use of viruses in cell delivered a patented mixture of nanoparticles. These particles inside the cells to respond to the impact of magnetic field, which allows you to control tissue growth in three dimensions. In this limbo status cells can live and multiply, forming a three-dimensional structure, in accordance with laid down in the DNA program. During the experiments, experts n3D Biosciences has succeeded in growing embryonic kidney cells, which can be used to accelerate wound healing, and testing of certain drugs.

Most Tenacious Beast of the Earth:It Does not Die in a Vacuum!