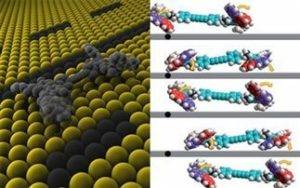 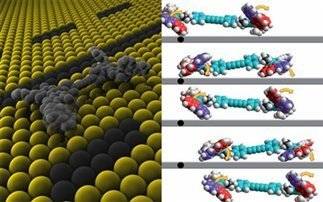 Dutch and Swiss scientists managed to create the smaller electric car in the world, a … molecule to which are attached four “wheels”, long a nano meter, one billionth of a meter (60,000 times smaller than a human hair) and which is spurred on electrons. Each “wheel” (rotor) of nano-car- molecule consists of a few people and is yoked to the “body”, ie the main molecule, with carbon double bonds. An electron microscope provides the necessary means of electron energy to move the vehicle on a copper surface. Scientists, without coming into contact with “car” which maintained its independence, could direct at will the course. At present, however, is moving rather slowly, it took ten pulses e “fuel” to move within six nanometers (billionths of a meter). Such nano-future vehicles may be used principally in medicine, robotics and more generally in nano-engineering. To give but these practical applications, you must first become feasible such a molecular machine to work under normal conditions, as at present “tsoulaei” only in a vacuum at a temperature of -266 degrees Celsius.

The most unusual mushrooms in the world (15 photos)