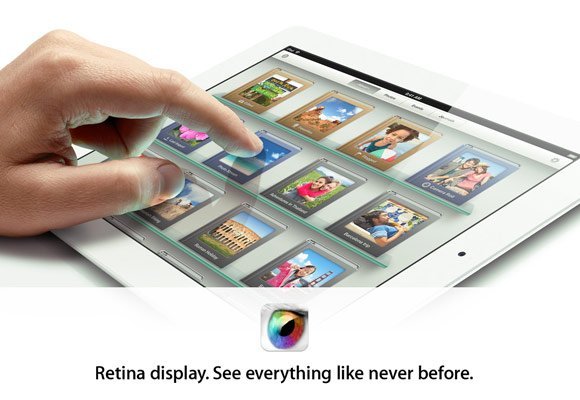 Sales of ” new iPad ” will start tomorrow , but the lucky ones, some way having obtained copies of  plates, constantly encouraging us to amusing details about the new product.
Recently we have come to know about the presence of 1 GB of RAM , and a processor with a frequency of 1 GHz and now added another interesting fact.
As it turned out, a stunning Retina-display with a resolution of 2048×1536 pixels is seriously increased the size of Apple applications on the new iPad.

For example, a new Keynote was “weighing” 327 MB (before the application took 115 MB), Numbers “grown” from 109 to 283 MB, Pages – from 95 to 269 MB, a iMovie is now 404 MB instead of 70 MB earlier.
The growth of applications associated with the updated graphic elements of new programs. At the same time Tinhte notes that it is only installation packages, ie unpacked and installed applications will become more “heavy”.
With the new 5-megapixel camera and support for iPhoto for iOS photos up to 19 MB, the most “budget” version of the new iPad with “only” 16 GB of on board now does not seem a good buy.
Unfortunately,  all applications releases for iPad standardized, so an increase in their volume and the owners will experience first-and second-generation tablets, despite the fact that Retina-schedule it is entirely unnecessary. For example, the developers have already updated their Tweetbot application and its size immediately increased from 9.8 to 25 MB.