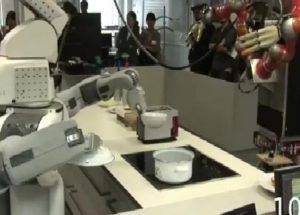 A team of engineers at Technical University of Munich demonstrated the capabilities of robots  named James and Rosie on the example of culinary tasks -Machines have a team to prepare sandwiches and popcorn. Robots have coped with the tasks, showing a hefty skill and precision of movement when working in the kitchen and performing related tasks. 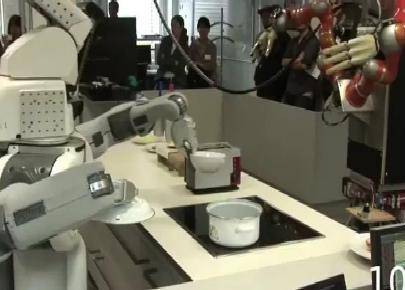 James and Rosie robots are programmed in such a way that they respond to the orders set out at length such as “prepare the sandwich,” and orient themselves in space by means of optical system “Microsoft Kinect“ . Perception algorithms are organized in such a way that the machine will recognize all the objects around them and know their properties and uses them for the job. The command “prepare sandwich” refers to a set of actions. The main goal is to develop machines that are subject to the general natural language commands and do not require additional instructions.

It is emphasized that all of the robots are not programmed in advance – The machine itself splits the command into a sequence of actions and to decide how to implement these actions and any other available means of doing so. Thus, the machine did not say go to the stove and turn on the burner. The robot knows that cooking popcorn you want to plate and the plate should be included. Everything related to its own location and navigation, manipulation of objects and careful with handling the responsibility of the intelligence machinery.

James and Rosie related to the project to develop a CRAM (Cognitive Robot Abstract Machine). The basis of the project are algorithms that allow the robot to control external objects using cognitive mechanisms of artificial intelligence. New software solutions are tested in laboratories belonging to four robots named James, Rosie, iCub and Bender. James is based on a powerful research platform PR2 robot project from Willow Garage. In the future, developers will continue to Munich to improve their algorithms and test their effectiveness in simple household tasks like cooking, table setting and dish washing.