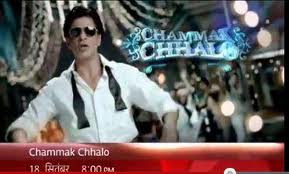 Aamir Khan  dance like a school boy in “Three idiot”everyone like it very much and film become a supper  hit.Then Salman khan’s funniest dance steps in “Body guard”made every one crazy  now  Shah rukh Khan also want to show his “comic dance moves” through his  RA.One’s song Chammak Challo where he is doing Kathakali steps and seems a little funny.

Ganesh Hegde gave him some door knob moves, stiff turns and odd steps first time when you see  him doing these steps it looks very odd but when you think about the plotline of the film where Shahrukh is supposed to be a robot (G.One)  that explains why the superstar is doing such steps would these steps will become as popular among the fans as Aamir Khan’s or Salman khan’s funniest dance steps were became in past.I like this funny dance in   Chammak Challo  What about you?