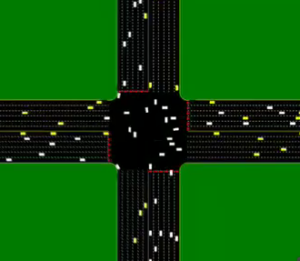 Peter Stone – Associate Professor, University of Texas at Austin, an expert in artificial intelligence and multiagent systems involved in the modeling of traffic, given the wide distribution of vehicles running on your computer. Stone believes that the car-robots are able to make the transportation system much more efficient.

Every crossroads – Stone says – is to control an autonomous intelligent agent which regulates the mode of movement of each car individually, rather than traffic lights, prohibiting or permitting the flow of traffic.

In the visualization model of the future intersection marked with white robotic vehicles, and yellow – with real cars and drivers of vehicles that have already passed through the intersection and did not need the services manager. We see that the robots pass the intersection without stopping at all, only slightly slowing down or accelerating to match the rest of his maneuver. People have to wait, but waiting on the order of magnitude smaller than the usual traffic lights.