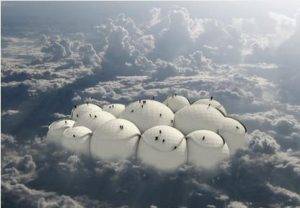 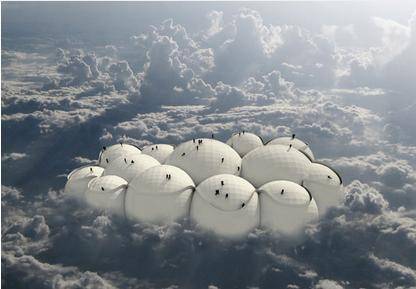 With all the talk of “The cloud” these days, New York`s architect Tiago Barros is taking the term in a whole new direction with his Passing Cloud public transportation concept.

The Passing Cloud concept by Portuguese-born, New York- based architect Tiago Barros looks to challenge the way we travel. This would-be public transport system would lack a pre-determined destination, instead leaving that up to fate…or prevailing winds.

The Passing Cloud is comprised of a series of spherical balloons that incorporate a steel skeletal frame in which nylon is stretched over. Passengers enter and exit the sky-grazing “Cloud” via ladders before departure and need only sit aboard during flight.

With the traveling “cloud” Barrios envisions  a method of transportation that harkens back to the days when the act of traveling was more exciting and less mundane; focusing on the importance of the act and not the destination.

Of course various safety concerns would need to be addressed if a concept like this were to ever take flight, but it’s still an interesting idea nonetheless.

Unidentified Flying Object, Fallen From the Sky in Namibia.See how it Looks