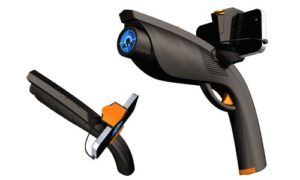 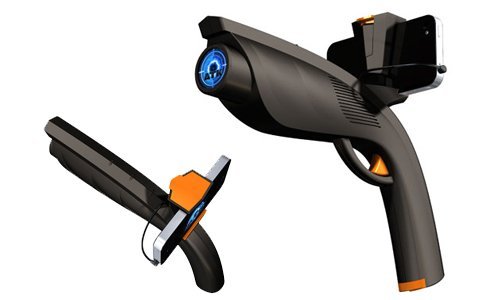 In June, the iPhone will ratchet XAPPR already sent, have been presented this week at the Nuremberg Toy Fair. XAPPR is an iPhone pistol, is fixed on the the iPhone. With this weapon, we go to hunt opponents in “virtual space”. For $ 29.99 plus shipping and can be XAPPR Coming soon.

Techisch is seen Xapprgun Although only an iPhone holder in the form of a weapon – for fighters in the Augmented Reality is likely this thing still be a cool gadget. Already 10 augmented reality games are playable with the XAPPR:

“The Xappr guns has already more than 10 amazing augmented reality games that will allow the player to intercept alien spaceships, find and eliminate ghosts, fight evil flying robots, hunt a horde of blood thirsty zombies and the most important – engage in battle with other players “

Interestingly, the game should be ATK (see atklive.com – unfortunately not in the German App Store). Here’s an iPhone “first-person shooter” killer game with real life is mixed. In short: you put yourself with the iPhone on the hunt for TRUE opponents.

But other games such as augmented reality AR Invaders should be supported. In all cases does the XAPPRgun of cool – and if you’re interested, this can already pre-order at:

(Via iClarified )
Spread the love