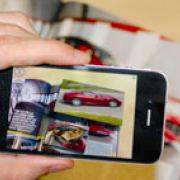 The IT giant HP has decided recently to take over the business software company Autonomy. It is the Group especially the developments of the British company in the fields of machine learning and processing of unstructured data. But Autonomy has developed other interesting products: This includes, among other things Aurasma , an application, the gesture control using Augmented Reality (AR) on mobile devices to connect.

In AR applications, computer generated content is superimposed over the image from the camera on a smartphone or tablet computer. This helps in navigating around or has the ability to create interactive guide.

Aurasma goes one step further: The latest version of the software that is currently in development, recognizes hand gestures. A user can then stretch out his hand and grab the camera before, there to interact with virtual content. AR content can be navigated previously had always using a touch-sensitive screen. A demonstration of Autonomy turns an empty table, an air hockey game: users of firing the puck, in which they wag their hands.

Autonomy’s software standard that allows companies to collect data and search, with text-based systems have been problems. Examples are audio records of sales calls or video recordings of surveillance cameras. “We use the same basic principle in Aurasma to take pictures or scenes to identify and then to overlay it with relevant content,” says Matt Mills, the director responsible.

Aurasma is already being used. So used to the American “GQ” magazine to be print ads and pages come alive. New is the option here to use a gesture control. “That makes things more interactive,” says Mills. This is similar to Microsoft’s motion controller Kinect : “It does react with his hand in the room and contents.”

The Aurasma app developed for iPhone, iPad and Android smartphones generated constantly a new visual impression of what is in front of the camera and comparing it with stored scenes. A place or an object is identified, invites Aurasma for videos or images and then superimposed so that the camera image. Users can also create their own content, by assigning them to a photo or video in real places and objects. Thus, for example, then a giant dinosaur head in the phone behind the Golden Gate Bridge appear.

Aurasmas main competitor is the Dutch company Layar , which is working on its own AR platform, users can add content. However, so far Layar focused primarily on the GPS coordinates to position content and only recently began to allow the precise positioning of virtual objects. Gestures are recognized by software not yet.

According to Mills Aurasma can track objects so precisely, so that AR-manuals are possible. In a demonstration, an employee be directed to the phone and settled back of a router then explain which port is for what function.

Still, the AR-use anything but easy, because you always need to be addressed device objects. Science fiction writers like William Gibson thought so many years ago to more solutions like special glasses that builds the user. This is exactly where it is also likely to gesture recognition are really handy, for example, to push virtual buttons.