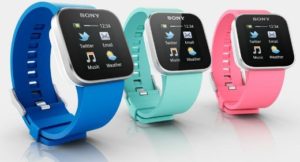 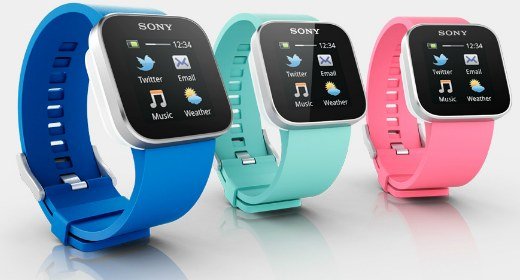 The device takes the name of Sony SmartWatch and another is merely an extension of their smartphones on the wrist. A clock in itself elegant and spartan, but the screen on which appears a lot more than just time information. Applications, notifications and so make the most direct contact with the network through the flick of your wrist toward your face: once meant Simply look at the time, but in the future will be how to stay connected to millions of people and their lives online.

The Sony SmartWatch (code name “MN2”) is a clock divided into two parts: the body itself, which are contained in the electronic components of the device, and the bracelet, useful simply to keep the body of the device to the wrist. The clock occupies a size of 3.6 x 3.6 x 0.8 cm (thickness increases to 1.2 cm at the wrist when caught in the cuff) for a total weight of 15 grams . The screen has a diagonal of 1.3 inches with a definition of 128 x 128 pixels. The battery promises 14 days of standby time and about 4 days of consecutive use in business, the charging is via USB connector.

Resistant to external agents such as dust and water, the clock functions as a device on the phone (any smartphone Android), which connects via Bluetooth and from which can be controlled by means of a special application. Once you have contacted your smartphone and watch, and once set the desired parameters, the Sony SmartWatch can become the new screen that read a mail, listen to music, check an appointment, view incoming calls, browse Facebook or Twitter updates and more.

A tap to interact with the application, two fingers to go back, scroll to the next item. Full compatibility guaranteed with Android 2.1 and newer devices . Notifications appear in chronological order and a vibration option can facilitate contact with the individual events allowing for example to stay up to date while excluding the ringer on the handset. What the eye of Google could bring before the eyes in the future, now you can have it short at the wrist.

The device is on the market at a price of $ 149.99 and bracelet with six possible colors (blue, light blue, pink, white, gray, black). The Sony site seems to be reserved when the clock only to the U.S. market, but promises an extension of the distribution nevertheless attentive without specifying any further detail. Users who attempt to purchase it from the early hours of rest will face a “Temporarily out of stock” which prevents you from going any further in the procedure.