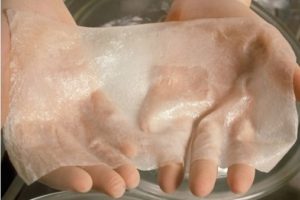 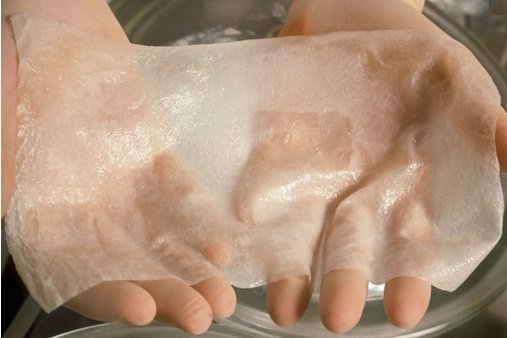 Scientists University of Pittsburgh and the Massachusetts Institute of Technology have developed a material that can be used as artificial skin for robotic mechanisms. The technology went to the Belousov-Zhabotinsky reaction involving changes in the chemical composition of the material in response to mechanical impact.

Chemical reaction to mechanical stimuli is primarily characterized by living organisms.Therefore, the University of Pittsburgh professor Anna Balazs (Anna Balazs) has to think about this stuff, as normal human skin, “which can send signals to the brain and tell him that what the one-body part is deformed or injured.” Belousov-Zhabotinsky gel obtained for the first time in the nineties of last century, stop adding the oscillatory motion of the bromide. The discovery by American scientists is that the gel can then “revive”, accompanied by high blood pressure and “knocking out” the components of the bromide of the material. The possibility of this effect was predicted by scientists from Pittsburgh and practically confirmed by scientists from Massachusetts, said Gizmag.com.

Creating a sensory skin for robots – until the case of the distant future, but today pittburgskaya team working on the creation of sensor damage, which by chemical reaction signaled the central digital systems, the presence of possible problems. After receiving this signal the central module gives the command to start the recovery process. Thus, the artificial system able to detect the damaged hull and begin to “heal itself” by chemical means. In addition to sensory functions, the new technology will allow you to create mechanical actuators that can act as muscle for robots. This is due to the bilateral nature of the reaction: mechanical action generates chemical processes, and changes in chemistry excites mechanical motion.