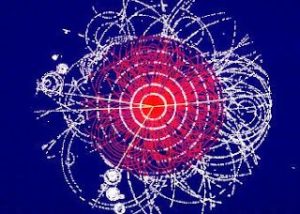 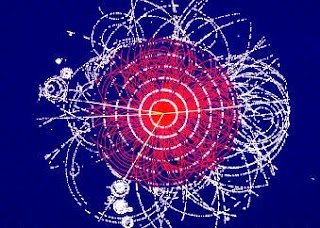 The origin of mass is one of the deepest mysteries of nature. But there is one, is currently controversial, theory that suggests that the mass comes from the interaction of matter with the quantum vacuum that pervades the universe and not from field Higgs.

Theory previously used to explain inertial mass – the property of matter that resists movement – but has extended to gravitational mass, which is the property of matter that feels the pull of gravity. For decades, the prevailing view in physics agrees that the Higgs field gives mass to matter, with the mediated by a boson particle called Higgs. But no one has seen the Higgs boson yet, despite the considerable time and money spent in his quest to particle accelerators.

In late 1990, Alfonso Rueda of California State University, the astrophysicist (which explores the sun- astrophysics and the stochastic electrodynamics) Bernard Haisch the Californian Institute for Physics and Astrophysics, suggested that a very different kind of field known as quantum vacuum may be responsible for the mass. This field, which is provided by quantum theory, is the lowest energy state of spacetime and is made from the residual electromagnetic vibrations at every point of the universe. Also called zero point field and is believed to manifest as a sea of virtual photons, which continued to emerge from nowhere .. Rueda and Haisch The argued that the charged particles of matter, like electrons and quarks regress endlessly around the zero point field.

If you are at rest or moving with constant velocity relative to the field, then the net effect of all this regression is zero: there is no power to act on the particle. But if a particle is accelerated, then the calculations made in 1994 showed that they expect to face more virtual photons from the quantum vacuum in front than behind. 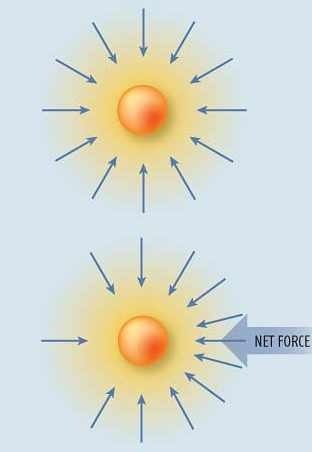 Above picture: particle at rest does not feel any pressure from the radiation of photons of the quantum vacuum. In contrast, the figure below, if the particle is accelerated by the presence or curved space-time due to gravitational field, then displays a radiation pressure that pushes the left.

Later, in 2005, explained that the same process may also explain why the gravitational mass. Imagine, say, a massive body that distorts the fabric of spacetime around it. The object will distort and the zero point field, so that a particle in the neighborhood will face more photons on the side away from the object than the nearest side. That would result in a net force to the object. And so the particle would feel the attractive force of gravity term, due to gravitational mass, or weight. Rueda and Haisch The explained that the same phenomenon (virtual particles) explains the two masses, thus demonstrating the equivalence of inertial and gravitational mass – something that Einstein argued in the theory of general relativity. In the same position the particle is accelerated, and gravitational pull exerted by the zero point field. Thus the production of the burden in a similar way to the birth of inertial mass. Their idea, however, not supported by many physicists, because the physics community believes that both the mass due to the Higgs field, and second that there is an enigma on the field zero point to be solved. The total energy contained in the field (according to calculations) is incredibly high – enough to deform space-time and cause the collapse of the universe in half a shake. Obviously this does not happen.

Moreover, the work of two individuals can only calculate the mass of charged particles. Nobel laureate Sheldon Glashow is negative: This substance, as you said and Wolfgang Pauli, it is not even wrong. But physicist Paul Wesson of Stanford University says the unorthodox approach of Rueda and is promising, but adds that the theory must be supported by experimental data. So if the Haisch and could give a specific forecast, it will force theorists to bend over in their theory. Why are all looking for something that can be measured.

A Round UFO taking Energy from the Sun, Surprised in the Images