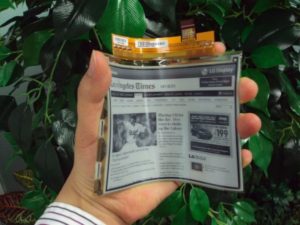 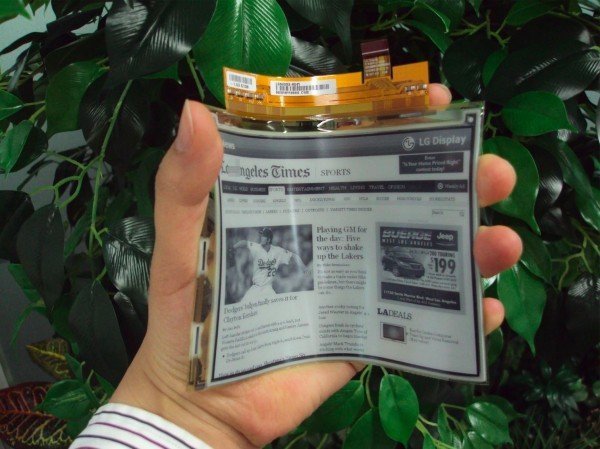 In recent years many companies are trying to upgrade the e-paper technology and we have recently seen the color Fujitsu FLEPia and Aerobee Bridgestone , but the older Sony’s proposal , however, the LG is the first announced today the launch of mass production for its own the flexible screen epaper (EPD), to be used in next-generation eBook readers!

The LG EPD technology-based e-ink, size is 6 “and analysis of 1024 x 768, thickness of only 0.7mm (33% thinner than today), weight 14gr (half of today), greater resistance (withstands drops from 1.5m), while the company promises a sense that it leaves the feel of paper.

With advancements in functionality and design, Plastic EPD to revolutionize E-Book market

Seoul, Korea (March 29, 2012) – LG Display [NYSE: LPL, KRX: 034220], a leading manufacturer of thin-film transistor liquid crystal display, announced today that it has started mass production of the world’s first plastic electronic paper display (EPD) for use in E-Books. The 6 “XGA (1024 × 768), e-ink, plastic EPD is expected to revolutionize the E-Book market with its advancements in functionality and design.

“With the world’s first plastic EPD, LG Display has once again proven its reputation for leadership and innovation with a product we believe will help greatly popularize the E-Book market,” said Mr. Sang Duck Yeo, Head of Operations for LG Display’s Mobile / OLED division. “Based on our success in mass-producing plastic EPD, we are excited as we look toward applying concepts from this experience to future developments like plastic OLED and flexible displays.”

Innovations in Functionality and Design
The World’s First Plastic EPD from LG Display offers users A paper-like reading Experience With A Plastic Substrate That is AS SLIM AS Cell Phone Protection Film, and A Flexible Design That allows bending at A Range of forty Degrees from The center of the screen. Compared to glass EPD of the same size and resolution, LG Display’s plastic EPD realizes a super slim thickness of 0.7mm which is 1/3 slimmer than existing glass EPD; as well as a weight of 14g which is more than 1/2 lighter.

E-Book users have long expressed a desire for more durable EPD, since around 10% of them have damaged their product screens from accidentally dropping or hitting them. When LG Display’s plastic EPD was put through repeated drop tests, from 1.5m above the ground or the average height of reading when standing, no damage resulted. When put through a break / scratch test involving hitting the display with a small urethane hammer, no scratches or breakage resulted.

As EPD gets thinner, lighter, and more durable with the introduction of plastic EPD, E-Books will be able to offer certain unique benefits compared to smart devices and tablets, including reduced eye fatigue and more efficient electricity consumption in addition to lower prices.

A Manufacturing Breakthrough
LG Display A Unique Technique Developed to utilize The High TFT Process, typically employed in Manufacturing and General LCD With temperatures exceeding three hundred fifty Degrees, in The production of Plastic ITS EPD. By overcoming the obstacles associated with applying the existing production process to heat susceptible plastic, LG Display achieved a breakthrough with the successful mass production of plastic EPD able to maintain strong durability in high temperatures.

Availability
The World’s First mass-Produced Plastic EPD from LG Display Will BE First Supplied to ODM Companies in China, followed by BE to Completed Products Released in Europe at The Beginning of next month.

Bliss is the Codename of the Textbook Secret Project by Apple