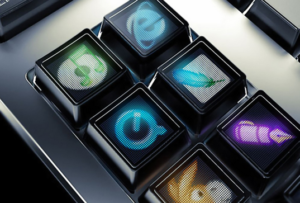 Microsoft may be planning to return to the charge in the field of peripherals with a new high tecladlo bill, according to a patent application filed by the American giant. Steve Ballmer’s company has introduced the patent office of the United States the necessary documents to shield the keyboard design of interactive very similar to the famous – and hugely expensive – Optimus Keyboard includes in each of the keys a tiny screen OLED can be programmed to display a different image according to the assigned function.

In his petition, Microsoft describes a device so susuarios selectively configurable to change the natural disposition of the keys and meet consumer needs. The keyboard includes various modules configured with an underlying display , which would project the image or light from the bottom. These modules should be “at least partially transparent” and include physical keys and panel projector . Like all patents are unclear, and details just above the concept with many technicalities but little useful information when you imagine how it would work.

Sketches and drawings however show how these modules cover the entire surface of the keyboard and would rely on a basis that would serve as picture viewer, giving each semi-transparent key symbol or letter that corresponds. This perhaps could reduce production costs that have led to alternatives such as the aforementioned Optimus Keyboard and all its variants to be so outrageously expensive for the consumer.

Of course, a patent does not mean a product in the making, but it opens the door for this technology is developed, if not by Microsoft, at least in the form of license to other manufacturers of peripherals, they would get finally bring this type customizable keyboard to the public at a reasonable price.