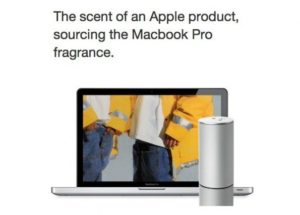 What is that three Australians have come up with smells, literally, after a great idea for an April Fools joke. Gavin Bell, Jarrah de Kuijer and Simon McGlinn have the specialized room fragrances company Air Aroma joined forces and created a very special fragrance for the most hardened Apple fans. The Mac perfume to exude an odor, as if you had just a package with a MacBook Pro open : It smells so on the packaging, paper, printer ink, plastic and aluminum, of course after. And now the great thing: It’s no April Fool!

“Apple fans will recognize the Mac-perfume”

Whether this fragrance now developed a similar appeal as the most boring exciting unboxing videos on YouTube, however, is uncertain. We may never know that, for a public sale is not planned, unfortunately. The three Australians who are responsible for the smell to him really only be used for an exhibition in Melbourne. They present their works of art under the collective name “Greatest Hits” and for their exhibitions, they also use repeatedly Mac devices.

The perfume is to be used in the upcoming exhibition entitled “De facto standard” as a room aroma. See it is dated 20 April until 12 May 2012 in the cultural center West Space in Melbourne. Perhaps the scent of perfumes Mac then yes so deluded that he is then in series – who knows.

And let’s face it: As long as YouTube and the Web still can not transmit smells, but want to make sure every Apple fan that smell always tangible. A new Apple device, you can not afford every week after all …