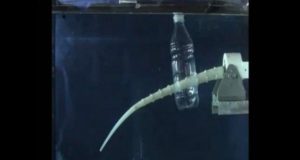 Can the technology to proceed with unimaginable speeds, but millions of years of evolution is hard to compete with anyone. We refer of course to the idea that scientists were Italians, who, instead of designing from scratch a robotic arm, decided to copy nature.

Nature in this case was the familiar octopus whose tentacles can manipulate objects as well if not better, than the human hand. The arm is then created in essence a octopus tentacle.

It is made of pliable plastic instead of hard, especially for underwater work is much more functional than anything that has been designed so far.