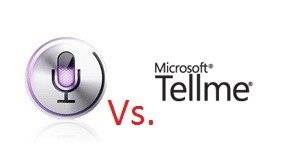 Recently, Craig Mundie of Microsoft, had stated that his company had presented the TellMe, a service which was similar to Siri, a year ago. However, there is finally some actual comparison? The various features of TellMe voice is actually on competitive with those of Siri.

The voice features of Windows Phone is “discriminatory” and scattered all over the phone. The Siri on the other hand is much more sophisticated and capable probably of more things. However, to emphasize that Mundie, said that Microsoft has shown a kind voice assistant, not likened in any way, but stressed, however, that there is something so terrible now, but want to show the Apple. To TechAU devoted little time to test the voice capabilities of the two functions side by side. As you will find yourself in the video, Siri, is actually far ahead of the TellMe, indeed this was the purpose.