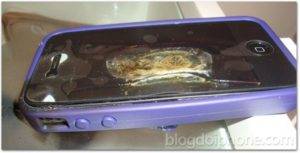 Imagine waking up at dawn with a short circuit to 15 inches from your face? That’s what happened with the Brazilian Ayla Mota, who was startled by his iPhone 4 burning and, luckily, wake up in time to manage incident and  to prevent a greater tragedy to happen. 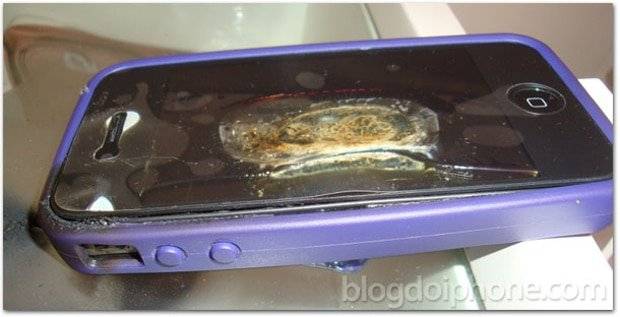 Some days before we have reported an incident of  “iPhone self-igniting on Australian Flight“, So it is Second time when iPhone 4  Catches Fire in Brazil.

According to Ayla, the unit was plugged in to recharge the battery while she slept. However, in the middle of the night, Sao Paulo saw sparks coming off the phone. When he got up, he realized that the whole room was enveloped in smoke and he acted quickly to get to get away from an accident.

In the morning, I woke up seconds before witnessed the burning of my iPhone when I saw a lot of sparks and black smoke out of the cell. My room was impregnated with an unbearable smell smoke! That moment, turned off the power switch in the room to remove the cell the outlet. Soon after, I opened the windows of the room and turned on the fan to remove smoke, that just came out completely on Tuesday morning. I do not hurt, although the unit is about 15 cm and height of my eyes,  explained to the iPhone Blog site.

This is not the first – and probably not the last – in which case a smartphone from Apple reacts this way. In several places in the world, there have been reports of iPhones entering short to be plugged into outlets.

However, there is a very important difference that occurs in Brazil: the guarantee scheme of the device covers only those products purchased on national soil, and Ayla came from France.Besides the scare, owner of the device may have even more trouble, since the product was purchased abroad and Brazilian warranty does not cover products that have not been acquired in the country.