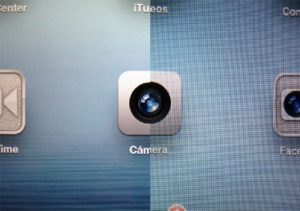 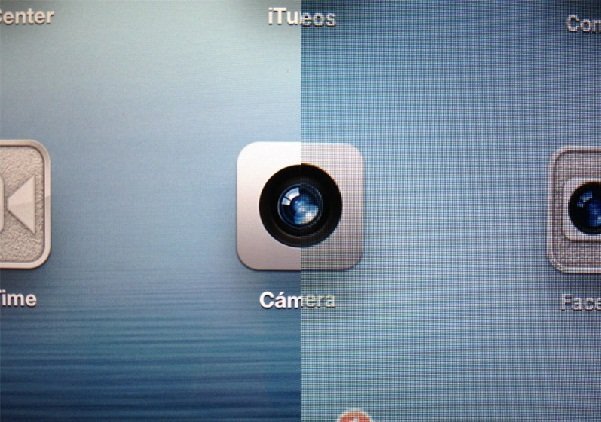 The new iPad comes equipped with a spectacular display that Apple says “due to the high density of picture elements (pixels) of the screen” Retina “, the human eye is unable to distinguish them.” Is it true?The physical and optical Pablo Artal , also some fanboy responds in two excellent posts.

Retina is a display of 2048×1536 pixels in front of the old diplay iPad2 that had a resolution of 1024×768 pixels. This represents 10.4 pixels per mm versus the old 5.2 pixels / mm. More than 3 million pixels compared to 800,000 which is 4 times more. Since the size of the two displays is the same, in an old pixel 4 of the new fit . The average distance reading of a tablet is 33 cm. so that the viewing angle of a new pixel is 1 minute of arc while the pixel occupied an angle iPad2 2 minutes of arc.

How much is a human eye? One eye of a young person with good vision can distinguish an angle of 1 arc minute .

That is, a young man with good vision it is able to distinguish a pixel of a new iPad . But as it is not so young or not so good with the vision and will not be able. In other words, the premise is true Apple: most are not able to distinguish a pixel in a Retina . Regarding the former iPad2, the vast majority if we could clearly distinguish the pixels. It seems clear that Retina is at the limit of what the human eye can distinguish , and higher resolution screens will have a better effect. Or as Prof. Artal, is an excellent compromise and fits perfectly with most eyes.

In a second post, Pablo Artal disagrees that the term Retina is suitable as the human retina is much higher. Mixing two concepts here, the comparison between them and the brand name.

It is true that the retina is far superior toRetina , says Artal. Each pixel of the 3 million that contains the device takes 96 micrometers.The retina contains about 120 million rods (night vision) and 7 million cones (for daylight vision and color). Each cone occupies 2.5 micrometers. That is, the pixels of Retina are 40 times larger than the cones of the retina so it can fit in a 1,500 pixel cones. Not only that, the retina covering 200 degrees and Retina30 degrees. Moreover, the contrast of Retinais 1 to 1000 and the retina of 1 to 1000 million.And about the colors, Retina is capable of displaying only a small range of colors that the retina can perceive. 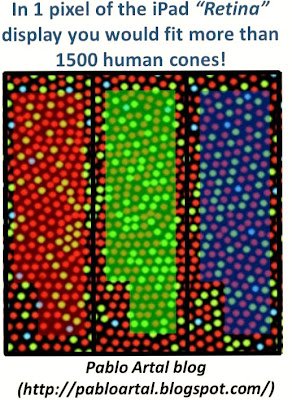 Concerning the name, companies are free to choose the names. Apple engineers whohave built an excellent product , no claim to surpass or even approach one of the wonders of evolution, the human retina . In my opinion, Retina is as good a name as any, I would say it is very good. As writes Professor Artal.