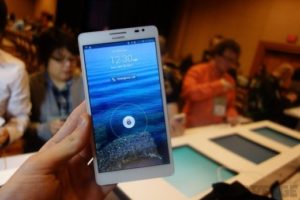 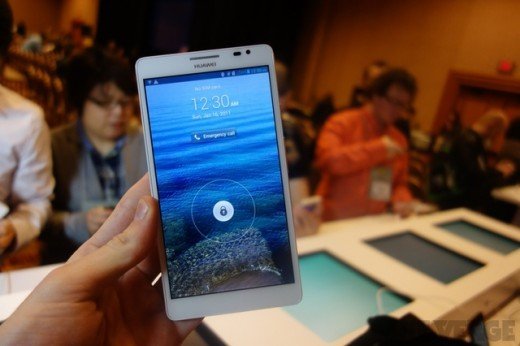 Huawei Ascend Mate is a giant smartphone display with 6.1 inch display and features literally mind-boggling: Quad-Core 1.8 GHz, resolution of 361 ppi, 4050 mAh battery , and much more.Originally generated the Samsung Note, a giant smartphone that had to coin a terrible name, phablet, to put it in a category. The race to the inch seems to have no end and if on the one hand Apple wants to keep the size of their devices rather small, the other competitors are competing to see who makes it bigger.

It seems that Huawei points to lead the industry with Huawei Ascend Mate, with display 6.1 “ . We’re not here to quibble about the meaning of this choice, but we know that such devices are appreciated and welcomed by consumers, why they are gnawing more and more market share to traditional smartphones.

Of course, if the Note is not already the maximum maneuverability, a display of 6.1 “puts the new device Huawei in direct contact with the tablet 7”. The new Huawei does not displace only the large (I would say that large is an understatement) display, but also for a high caliber technical level . The following technical specifications:

A device that lends itself so much in comparison to his brother , “child” of Samsung Note 2, which has a display of “only” 5.5. ” From the point of view of the technical differences are laughable, but the battery is exaggerated and support the “split-screen” may be preferable to many of Huawei’s proposal, which does not lack anything to its users.

Gizmodo has tried and admits that the device, although it can safely hold with one hand, it is not absolutely usable in all of its functions without the aid of both of our upper limbs. Mode “one hand” can make things a little ‘less frustrating, but there are still a lot of interface elements that we will not meet with just the thumb.

The feeling is that some companies, in the absence of real innovations, link all of the dimensions, a guarantee for the short term but in the long run users may get tired, back to more manageable and compact models.

And you? What do you think of this frantic race to inches?