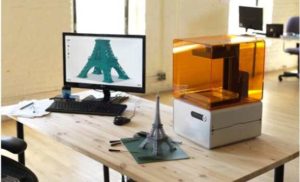 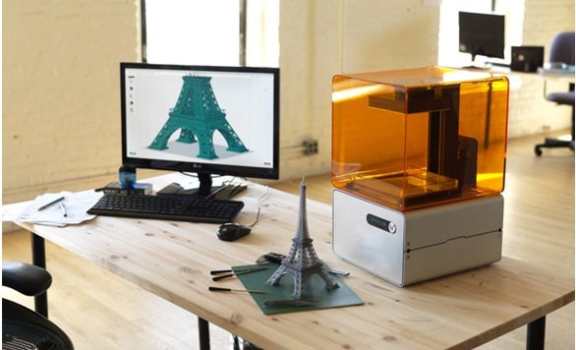 We all know the power of Kickstarter , a popular funding site  crowd funding projects which has allowed many to see the light.. Today we speak about one of them which has broken records for its popularity: FORM 1, the 3D printer for professional results at a much lower cost than the conventional.

The creative artists who are eager to see their designs come true have a reef with this project. FORM 1 is a high-resolution 3D printer , which allows very accurately recreate digital models. Tanta, allowing match other models that cost tens of thousands of dollars, but at a much lower price , and pretty easy to use, as claimed by its creators. Your software is much more intuitive than the market is accustomed to using, and starts with a single button. Simplicity at its finest brought something very interesting in a time when this technology is booming. So much so that even the U.S. government is committed to its use .

Where is the secret? Spend to use FDM rapid prototyping technology, the stereolithography . Nothing new, the world of 3D printing is so used to these two models as may be the automotive to the car manual and automatic cars. Simply hitherto low-end 3D printers offer results much worse than stereolithography, but at lower cost. After over a year of focused work around this obstacle, the FORM 1 team, working from Montreal, Boston and London, has achieved satisfactory results.

Have achieved substantially cheaper costs stereolithography. They ensure that the final models obtained with this impression far outweigh in details to typeset FDM technology , as can be seen in the image above comparison, for similar costs. After seven generations of prototypes that run tests, are ready for mass production, which led them to ask for support on Kickstarter, with results that even they expect, certainly. We raised nearly 30 times more than expected :   they needed $ 100,000 and we have earned $ 2,945,000.

Now it’s time for this team of engineers and designers, who will soon begin the final phase of the project, which includes back support of its more than 2,000 employees by type of assistance received. From a figure printed with FORM 1, to T-shirts, development kits and modeling, and the printer itself FORM 1, for those who contributed at least $ 2300. Much less than what it may cost another model that offers similar final results.