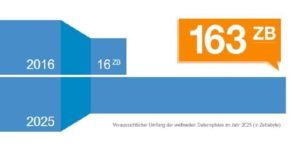 Mark Re of Seagate looks to the future of data. IoT and other topics will lead to a dramatic increase in the amount of data.

Current technologies are undoubtedly very impressive. Above all because they are becoming more and more adaptable and adaptable. This is particularly evident in the Internet of Things (IoT). An enormous network of interconnected objects that uses real-time data to significantly influence and change our lives.

Example of autonomously driving cars: If a pothole appears on the street or a detour, this is registered by the car’s systems. These not only inform the driver, but also – via the cloud – other road users or self-driving vehicles. This is exactly what happens when machine learning meets the IoT – all underpinned by real-time information.

The German vehicle manufacturers and the supplier industry have recognized the signs of the times. For example, Audi (together with Huawei and Vodafone) has developed a system that allows the vehicles to communicate directly with one another.This model significantly increases road safety. For their part, Bosch and Nvidia have created an on-board computer with artificial intelligence that is to form the brain of the autonomous vehicle.

Data is the fuel of the IoT. They are the basis for a new generation of powerful, networked devices that have a lasting impact on our lives. Autonomous driving is just one aspect among many. The Free and Hanseatic City of Hamburg is a real pioneer of digitization. The street lights become brighter when a cyclist approaches, traffic lights automatically recognize when a bus is approaching and automatically extend the green phase for trucks. The most ambitious Hamburg project, however, is smartPORT – an intelligent infrastructure for Europe’s third largest port. With elements of IoT, big data, the cloud and mobile devices, information is sent in real time to everyone for whom it is relevant. The result is an optimized flow of goods and traffic in the entire port area.

Today, hardly any device or infrastructure works without a computer. The data generated here is correspondingly more important. How important exactly? With the IoT, it is immeasurably more important.

In fact, the total amount of all data in the past year is estimated at 16.1 zettabytes. In 2025, the IDC and Seagate believe that this amount will reach 163 zettabytes. The majority of this is accounted for by the IoT.

For comparison: The Library of Congress is the world’s largest library , all books would add up to 838 miles. Almost every book printed in the United States can be found here: a collection of no less than 208 terabytes of data (Lyman & Varian, 2000). 163 zettabytes are equivalent to 784 million Libraries of Congress – year after year. That is what is meant by “big data” today.

To the extent that the IoT continues to develop and thus confidence in the technology grows, possibilities are also created for sensitive areas. One of them is autonomous driving.

IDC and Seagate estimate that by 2025, about 20 percent of all information will be critical to the continuity of everyday processes. One tenth of this amount is even hypercritical or has an impact on medical applications. Much such data is generated by the IoT – and the increase is dramatic.

Hence the need to prioritize critical and hypercritical information. This in turn calls for a completely new way in which systems record, manage, store, save and process data. In future, analytics will always have to take place in real time. The better the analysis methods, the better the position of the user in the competition.

The enormous increase in real-time data is primarily due to a change in digital storage. Some of the information must be stored as close to the point of use as possible, while the majority is stored in protected cloud data centers. In any case, it is also certain that the requirements for investment and innovation in terms of high-capacity storage will increase and will be at a high level.

It all comes down to the data

If you can’t measure or quantify it, you can’t improve it.

Our hard drives are full of movies, music and other entertainment formats today. But that is now changing: Almost all storage locations increasingly contain information that is directly relevant to the functioning of everyday life, privately and professionally. Just as more and more data are vitally important instead of “just” life-enriching, so are the ways of dealing with them. This development can only take place on the basis of rapid and radical technological progress. Big data and metadata (data about data) push into all areas of life – with the corresponding consequences. I find it incredibly exciting.