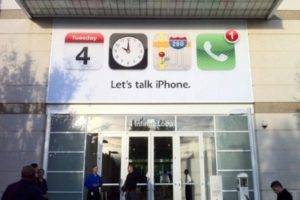 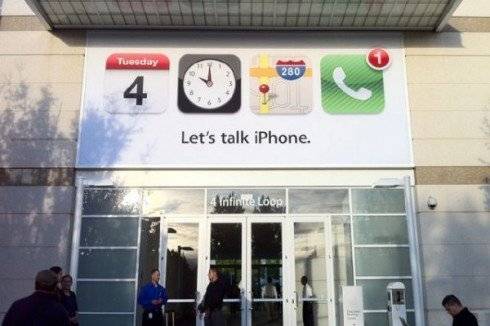 Today, October 4, 2011,There is a long-awaited presentation of the Apple. It is assumed that it will be made on a new smartphone iPhone 5.We have Developed a Summary of Event.

From Starting here is a full-fledged broadcast Summary.It is unknown whether the presentation of Steve Jobs or will Tim Cooke, will show the iPhone 5 or iOS 5. Announcement of Apple, as always, is full of mysteries.

22:42 After a while, this article will be updated with pictures and you can fully enjoy the presentation. Thank you for being with us!

22:40 Tim Cook: “I am proud of the company, engineers and a team that developed these innovations.”

22:32 p.m. Assistant does not support the Russian language. Only English, French and German.

Assistant works in Safari – for example, to search queries.

Events to the calendar, SMS messages can pronounce.

“I have plans for today?» iPhone responds “No” by checking your calendar.

iPhone learned to pronounce the SMS through the headset.

22:27 Technology is powered by Siri. iPhone to recognize the question about the weather.

22:26 Phil Schiller repeats all the innovations iPhone 4S. The new camera, the new processor. And “everything works.” Voice recognition on iOS 5. Intelligent Assistant. Appeared on the scene, Scott Forstall.

Twenty past ten p.m. iPhone 4S runs in two bands (3G/4G). “This has never happened.” The antenna of the 4 segments. The advantage of the two ranges – you can switch between GSM and CDMA networks at will.

22:15 Show the video about Infinity Blade 2. Now you can customize weapons.

22:14 reactivated text tape, after a while to load photos.

22:11 We apologize for any small glitch in the translation of a problem with the network. A few minutes later all the restore and download the information, do not worry.


22:09 graphics processing up to 7 times faster than the iPhone 4. Play opportunities are immense.


22:07 Let us turn to iPhone! “Competitors have not been able to copy the iPhone 4. This is number one in the world. “And now we’re talking about the iPhone 4S


22:05 Switched to discuss the iPod Touch. “This is the world’s first music-player game.”

22:00 We have developed a new firmware for the iPod Nano. The new interface, a modified program for fitness.

21:55 iTunes Match – another new service. All of your music collection will be available on the web .

21:53 You can invite friends to places on the map, assign group meetings.


21:47 In iCloud can upload documents. API iCloud will be available to all developers.


9:46 p.m. Photo Stream will upload pictures in the “cloud.” They will be available on all devices, including PC.


21:44 “Now you integrate iTunes into iCloud.» tells about the ability to download previously purchased music “

21:36 In iOS 5 there to run the camera with the Lock Screen. There is autofocus and auto exposure.

21:35 Now Newsttand. “The most popular magazines will be loaded onto the device in the background.”

Thirty-four past nine p.m. Twitter integrated into iOS 5. “Now you can tweet pictures directly from a photo album.”

21:31 Forstall talks about iMessages. “They come in all devices with iOS 5”

21:28 Apple has provided developers with income of 3 billion. ” The new application Apple – Cards.

21:23 “In every state in the U.S. is implementing a pilot program iPad in educational institutions. iPad is in the airline industry. “

21:20 “iPhone – this is the reason that today we are here so much. iPhone 4 is half of the total market iPhones. Consumers love the iPhone. »

21:10 The first product – Mac. Tim compares Mac OS Lion with Windows 7, talks about the sales. Six million copies of the Lion has been downloaded. 80% more than the Snow Leopard.

21:07 On the screen is video of stores. “357 stores in 11 countries. There are many more to come. Today we will introduce four new products. “As many as four of the product, rather than one, as many thought, after publishing photo invitation!

21:06 Tim Cook: “Today we hear a lot about innovation, software and hardware. As well as the integration of these innovations. ”

21:04 “I would like to welcome you to our campus. This is the second home for us. “Here, launched the first iPod.

20:58 “Ladies and gentlemen, our presentation will begin shortly!”

20:56 4 minutes. In the hall a lot of cameras, but the official video broadcast, as a Lion, will not. Room is small, there are usually conducted staff meetings Apple.

20:55 5 minutes. The first photo of the hall where the show is something new from Apple.

20:40 Up to the beginning – just 20 minutes. Japanese site has told Apple that October 14 will begin selling iPhone 4S.

20:35 Near the room where the presentation will be rather empty. Only a few journalists wander and photograph.

20:33 On the Japanese Apple site has been found iPhone 4S.

20:31 Before the presentation, there are very few. In Cupertino has invited journalists gathered. Alas, journalists from Russia, Apple is not invited.

20:30  Half an hour before the broadcast. What will provide Apple? The whole world is tense and waiting … Call your friends, join the debate in the comments. Sensation soon.

20:07 left to wait for an hour. Continuation of the most popular smartphone in the world, and perhaps something else. Very soon learn the details. We’ve added a live video – now you’ll know exactly about the new iPhone the first in our revoseek.com.

17:00 Before the presentation there were less than 5 hours! We are preparing to broadcast, but in the meantime you can discuss it – what will Apple? Speak your opinions, read other people’s. I wonder if I can guess we …