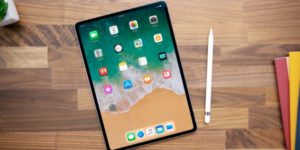 New iPad Pro, the long-awaited update of the MacBook Air lineup and other loud announcements.

This year, Apple again gathers journalists for the second autumn presentation . The event will be held at the Brooklyn Academy of Music in New York under the slogan “Something More About Creativity.”

Such a transparent hint and more than 350 different design options for invitations, no doubt, suggests that the company will show the new iPad Pro with advanced features for creativity. However, a huge number of leaks also points to other long-awaited announcements.

According to insiders, the new iPad Pro will get a full front panel screen, following the fashion for a frameless design. The tablet will have two versions: the older one – by 12.9 inches and the younger one – by 11 inches, the diagonal of which will increase due to the narrowed frames.

In addition to the new A12X Bionic processor, the Home button will disappear in both versions, but Face ID and Anomoji support will appear. Unlike the iPhone, in iPad 2018, unlocking will work in any orientation.

Most likely, the tablet will lose its 3.5-inch audio jack, and the proprietary Lightning will be replaced by a universal USB-C. It will allow you to connect additional accessories, among which will be external displays with a resolution of up to 4K.

For the new iPad Pro will also introduce Apple Pencil 2 with improved features for drawing and magnetic mount. Unlike the previous generation, the stylus will be completely wireless, including the initial setup procedure. Apple Pencil will equip the W1 chip in AirPods, so that it can be easily connected to several devices.

The compact tablet Apple has not been updated for more than three years, and it seems that the company decided to put a cross on it. However, well-known analyst Ming Chi-Kuo predicts a possible announcement of iPad mini 5 at the upcoming event. Details about the new product almost none. You can suggest the appearance of the chip A12X Bionic, but most advanced functions, most likely, should not count.

The long-awaited ultra-compact laptop, the output of which has been tipped for several years in a row, apparently, will finally appear. It is not yet clear whether it will replace the outdated MacBook Air, or will become an updated and more accessible version of the current MacBook line.

The novelty will definitely get a Retina-display with a diagonal from 12 to 13 inches, a modern hardware platform based on Intel processors of the eighth generation, as well as 8 GB of RAM and USB-C ports. At the same time, the price of the new MacBook will be around $ 1,000 for the initial configuration.

Another popular Apple computer that has not received updates for more than four years, according to rumors, should also be shown at the presentation. The new Mac mini will be more focused on professionals and at the expense of powerful stuffing will be somewhat more expensive.

Sources agree that the computer will be equipped with Intel Coffee Lake processors with Iris Plus 655 video chips or with new Whiskey Lake. The minimum amount of RAM will increase from 4 to 8 GB. In addition, USB-C ports and support for 4K monitors will appear. There is also the possibility of having Fusion Drive hybrid drives in an entry-level configuration.

Some sources claim that Apple may show the next generation of its compact wireless headphones. In addition to W2 chips and moisture protection, among the innovations of AirPods 2, you can highlight support for wireless charging, noise reduction, as well as Siri voice activation and pulse measurement function.

With Apple’s proprietary wireless charging, something didn’t work, and now there is an ambiguous situation because of this. The company prefers not to mention the device announced last year, but there is information about AirPower in the instructions for the iPhone XS and XS Max. If the charging mat is still destined to be, then we will probably find out about it on October 30th.

At this flow of rumors does not end. If you believe other insider information and the findings of journalists, Apple may also surprise us and show some more new products.

What products are you waiting for the most? Share your expectations and predictions in the comments!