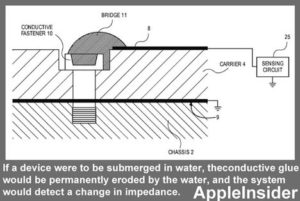 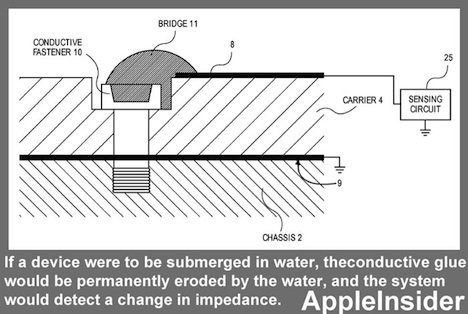 It is known that Apple built into its IOS devices called “moisture indicators” in order to prove your repair potential water damage. However, the previously used technique is not very reliable. Most recently, Apple has loosened the warranty , since the indicators do not always give an indication of whether there has been indeed a massive water entry. This allows for example for sports sweat drop on the indicators and “trigger” them.

Now Apple is working, according to Apple Insider for a more reliable method to detect water damage. Under the title “Mechanisms for Detecting Exposure to Water in Electronic Device on,” describes Apple has a patent, in which a circuit technique is based. The previously found inconsistencies in the handling of guarantees could be minimized in this way.

According to Apple Insider a water soluble adhesive may be used, which dissolves in water intake and release resistance. The triggering of resistance could be recorded in the device so that it can be read in the aftermath of the water inlet.