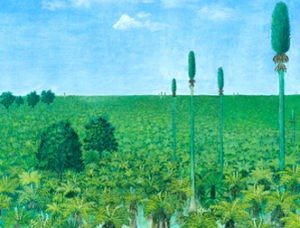 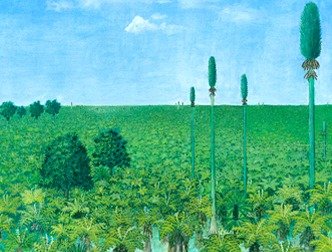 The eruption, which occurred in northern China around 300 million years ago, covered with ashes and “mothballed” the whole ecosystem of the forest area of ??about a thousand square kilometers. Scientists were able to completely restore the appearance of this ancient forest. For in Asia is the first such reconstruction.

A group of American and Chinese paleobotanists led by Professor Herman Pfefferkorna (Hermann Pfefferkorn) from the University of Pennsylvania (USA) were the first to restore the appearance of the forest area that existed on the territory of Inner Mongolia – an autonomous region in northern China in the early Permian period about 298 million years ago.

Such a reconstruction of the scientists made with a powerful layer of volcanic ash, which is well preserved individual plants, tree trunks, branches and leaves. According to the authors, if the eruption of Vesuvius destroyed the cities of Pompeii and Herculaneum, but preserved for humanity part of the culture of ancient Rome, the volcanic eruption in China has kept a piece of ancient ecosystems.

Scientists managed to restore the appearance of the forest area of more than a thousand square miles in three areas located close to each other. In the Permian period, this part of the land was part of the ancient continent of Cathaysia – he united the territory of south-eastern China, the Malay Archipelago, Indochina and the Sunda Islands.

The study of buried under tons of volcanic ash allowed to allocate resources to this area six groups of vegetation. At the bottom tier timber grown tree ferns from the family Marattiaceae. The height of the trees Sigillaria and Cordaites reached 24 meters. In the tree layer met and low trees – relatives of ferns – representatives of neggeratievye.

Interestingly, as noted by the authors of that in different areas dominated by different species. For example, in some communities dominated neggeratievye, while in others they are seen very rarely.