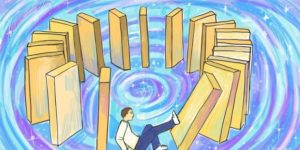 Learn about the most frequent tricks of the brain to no longer fall for them.Here we will discuss the psychological effects that distort the perception of reality. 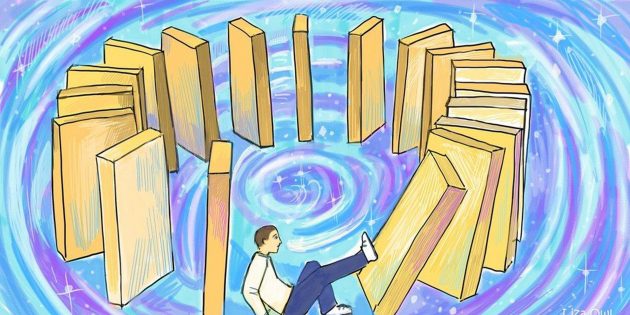 A person is inclined to exaggerate the interest of other people to his person. Imagine: you stupidly stumbled on the street or noticed a speck on the shirt already halfway to work. It seems that everyone saw it as if you were illuminated by a bright beam of a searchlight, and the attention of those around you was completely focused only on you.

In fact, this is not so. Someone will really pay attention to the spot or your clumsiness, but not all. And they will not give it as much as you think.

2. Belief in the justice of the world

People believe that justice will prevail: good deeds will be rewarded, and villains – punished. And if trouble happens to a bad person, we think: “That’s right for him, he deserved it.”

A person just needs to know that life is fair and everyone will get what they deserve. Someone calls it God’s will or karma, but the essence does not change.

The effect is based on the mighty power of suggestion. Placebo is a non-healing medicine, which is offered to the patient as an effective remedy for his problem. As a result, the person is waiting for the result, and after a while, he really feels better – this is the placebo effect.

4. The effect of the audience

A person does the same thing differently in solitude and in the presence of other people. Moreover, observers can influence both positively and negatively. For example, a person will be better able to cope with a well-known job and worse perform new tasks when someone else is with him.

Psychologist Robert Zajonc believed that observers are the cause of excitement, because their reaction to human actions is unpredictable. When a person does what he knows and knows, it is easier for him to cope with psychological stress and fear of evaluation than if he takes on a completely new unfamiliar task.

5. The effect of Google, or digital amnesia

People stopped remembering information that can be easily found on the web. It is no longer needed. The Internet simplifies life: everything that used to be stored in a library or a person’s memory is now available at the click of a mouse. Information is perceived, but the brain thinks that it is not necessary to concentrate and remember it, because there is Google.

We consider accurate the general characteristics of our personality, if we think that they were created specifically for us.

Psychologist Bertram Forer invited a group of students to take the test. The participants completed the task and handed over the papers for processing, which they did not actually carry out. Forer simply compiled one general description of the personality, suitable for everyone, and presented it to the disciples. He called students one by one and asked them to evaluate the accuracy of the characteristics on a five-point scale. The result was an average score of 4.26. That is, according to the participants, the accuracy was high.

The psychological phenomenon belongs to the category of self-fulfilling prophecies. Some sociologies describe this as self-hypnosis: a person’s expectations influence his actions and actions.

When we think that we are sympathetic to the interlocutor (even if this is actually not the case), then we build the conversation in a special manner and imbued with mutual sympathy. Or when a manager places high hopes on an employee, sets challenging but achievable goals, the employee shows greater productivity and better results. Such self-programming works both for success and for failure: waiting for failure will certainly lead to it.

8. The paradox of choice

The possibility of choice baffles. And although it seems that a big choice is good, in reality it turns out differently.

We need to figure out how each of the options differs from the others and which one will be better. It is not only long, but painful. As a result, a person may not choose anything at all or will nevertheless stop at one option, but he will not get pleasure from it anymore.

The more people are near the scene of a crime or an accident, the less chance that one of them will react and help the victims. Every witness thinks that he should not help, but another.

Responsibility for the act is distributed among several people, and for each individual it will be lower than it actually is. But if there is only one eyewitness to the incident, he realizes that there is no one to shift the responsibility to, and is most likely to come to the rescue.

We attach great importance to one detail, ignoring the big picture. This can lead to incorrect judgments about the situation as a whole or to negative consequences.

For example, some believe that money is the key to happiness. But this is not the case: a high income in the absence of health, time or love can hardly be called the ultimate dream.

11. The systematic error of the survivor

We make wrong assumptions, because we do not take into account all aspects.

During the Second World War, statisticians Abraham Wald were asked to calculate which parts of the bombers needed to be strengthened in order to increase the number of pilots who returned to the base. Wald discovered that planes with fuselage damage were reaching the base: on the wings, tail and other details. Machines with black engines or gas tanks were much smaller. Someone proposed to strengthen the wings and tail – it seemed logical. But Wald thought differently: since there was no damage to the engine and fuel tank among the returned planes, it means that they simply do not get to the base. He decided to strengthen these particular parts and was right.

It would be a mistake to take into account only the data on the returned, that is, the “survivor”, while the overall picture may be quite different.

12. The effect of the first impression

You can not make a first impression twice. And it is important! The opinion, formed in the first minutes of dating, affects the further assessment of your person. And communication with you will be built, relying on the impression of the first meeting.

The bright presentation of information by a reputable speaker can veil the futility of what has been said. Listeners will come out of the audience with the thought that they gained new valuable knowledge, even if they listened to outright nonsense.

A person prefers information that confirms his point of view. Even if the data is unreliable, it will still rely on them. A common trap that everyone gets into more than once.

People believe in the connection between things that are in fact independent of each other. This trap creates prerequisites for the development of stereotypes. “All blondes are stupid”, “In large cities, people are soulless and embittered,” “The day did not set, because in the morning a black cat crossed the road” are typical examples of illusory correlation.

We attach importance to one bright, memorable aspect, but ignore the rest and because of this we incorrectly establish a causal relationship.

The general impression of a person affects his assessment in particular cases. Thinking that a person is good, we believe that he is also smart and attractive. Or vice versa: an attractive person seems good and smart to us. We project the general opinion on concrete qualities, which is actually wrong.

Many people remember this curious toy from the end of the 90s: a cute plastic shell and a monochrome screen with an electronic pet. Strictly on schedule, we fed the ward, gave me medicine if he fell ill, and we were very sad when he ended up dying of boredom. The children were tied to an unreal pet and experienced warm sincere feelings.

Now Tamagotchi has lost his former glory, but his attachment to gadgets has remained. Mobile phones, tablets and even individual applications – they all cause emotional dependence . It can manifest itself at any age and have both positive and negative effects.

People tend to defiantly buy goods at a high price to emphasize social status. It seems unreasonable to many to consciously choose the most expensive thing in a store just to proudly carry it to the cashier with a price tag up. But it really works: in the season of rising prices, the demand for goods also rises.

Absolute perfection pushes away, but clumsiness and mild disruption cause sympathy. Especially if a person is self-ironic and any confusion turns into a joke. So if you want to please someone, do not strive to seem better than you really are. Simplicity and naturalness prevail.

Another psychological phenomenon associated with memory. It turns out that we remember the interrupted action better than the completed one.

So, if a person is not allowed to finish what he started, there is some kind of tension that does not let go until the task is completed. And so he will remember her.

For example, an employee prepares a report, when suddenly he is asked to enter the conference room and hold a meeting . Returning to the workplace after a few hours, he will not forget about what he was doing. But if he had managed to finish, the memories would not have been so clear. These tricks are also used in advertising: lack of clarity in the video makes the beholder better remember it.

People attribute to others the qualities, emotions and experiences that are in themselves. Good people think that everything is the same. Survivors of a painful separation are sure that other couples, too, will sooner or later disperse.

22. The effect of ostrich

When something bad happens in our lives, we don’t want to know the details. Figuratively speaking, we hide our head in the sand and try not to go into the problem. Although ostriches, as is known, still do not. But investors are trying as little as possible to monitor the state of their deposits when the market begins to decline.

Please share your experiences and views about above psychological effects.