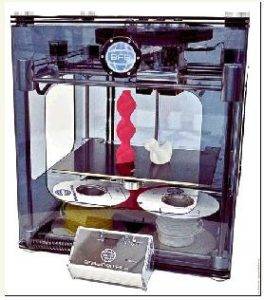 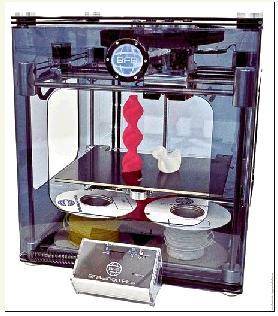 In “Star Trek” crew of the Enterprise had a machine capable of replicating physical objects. Today you can print earrings, candle holders and even dentures.

Today, if you break your favorite mug can enter an Internet site and acquire the file of a similar product for $ 10 and send it to your 3D printer, so called, and wait about 20 minutes to  generate the plastic object .
Remember that homemade paper printing began in the nineties with dot matrix teams that text and images traced with black lines. Today on your phone you can print a picture at home.
Similarly 3D printers today do not deliver great detail in objects, but imagine how it will be in 10 or 15 years.

Today you buy the kit with the thermoplastics to form the object layer by layer in 3D,” said Bre Pettis, founder of MakerBot Industries, one of the first to create 3D printers for the mass market.

Your machine prints objects measuring up long and 30 centimeters wide by 40 inches high. But it is not unique and, in fact, is not the best prints.

The company 3D Systems, which makes prototypes and conceptual models to large organizations since 1986, launched earlier this year for the consumer machines from one thousand dollars.

Prices of 3D printers are coming down gradually so that people can create their ideas rather purchases made, “said Rajeev Kulkarni, vice president of consumer solutions for 3D Systems.

Whether from the website or by phone, anyone in the world can order a printer and will be sent to their home, said the vice president.

However, 3D printing can also be done on request. For example, the site generates Shapeways.com your drawings and ideas and turns them into objects of metal or plastic, with prices ranging from $ 9.Within the portal provide online software to create certain objects such as spiral poems to serve as candle holders, metal rings or cufflinks initial impression. Furthermore, anyone can create and upload your own picture for them to become a beautiful pair of earrings, a bracelet or a pendant.
Experts of the company will verify that the model is sent to print viable 3D. Even online you will see a sketch that can turn it, see it from all angles so that you disagree with the order.

Once accepted by both parties begin to process your order in industrial 3D printers, commonly used for prototyping business.
If there is any mistake or problem in the file, the company will contact you via email to notify you if you make a change or corrections to the file.

Bespoke is considered a center of research, study design and, in turn, an area of engineering where contours are performed for prosthetic legs using 3D printing. Therefore, in order to give a new look to people with disabilities.
Scott Summit, founder and chief technology officer at Bespoke, said in an interview that his experience of creating ten design patents for companies like Samsung, Apple, Microsoft and Logitech served to launch the company in 2009.
According to the manager, the company produced a similar scanner to document there for people to register their leg on a flat surface to make then 3D.

Patients can go to the headquarters in San Francisco, or go to places where other companies have these detection equipment to send 3D files Bespoke.

We have 12 people who are responsible for interviewing the patient and scan their legs . Then follows the design and printing which already gets the final product, “he described. Once you have the file in his hands, making the new prosthesis can last from two to seven days and cost between $ 4 and 6 000.

MakerBot offers a printer that assembles at home that you can print simple objects in plastic and polymer costs about $ 980.
On the other hand, 3D Systems, has 25 years making equipment for industrial prototypes, and offers printers from U.S. $ 1.200 promising superior print quality.

This will change the user’s creativity will move from 2D to 3D creative environment. People bring together ideas, designs, models and innovations, a fact which was not possible with business printers, “says Kulkarni.

the3dstudio.com On the site you can buy 3D files ready for print and are ideal for users who have no knowledge software such as Maya.
The printers work with special plastic strips or polymers that fuse to form objects (are the two reels at the base of the printer in the photo). There are two types of materials: PLA (polylactic acid) that allows transparent objects and can be completed rapidly cooled with a fan home. And the ABS (acrylonitrile butadiene styrene) that delivers more rigid and resistant objects.
So, you could “print” your new frame glasses, rings, cutlery, hooks for the shower curtain, even objects made ??of chocolate.