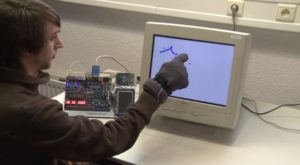 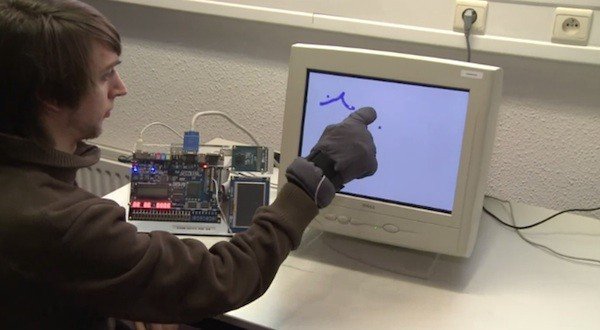 For several years is very rare to find in an office or home computer connected to a monit or CRT , ie monitors with cathode ray tube. These screens were relegated to warehouses, storage or recycling collection points from which popularized the use of flat panel displays, such as TFT monitors, LCD or OLED. In a world full of flat screens and devices, touch screen, watch a CRT is practically a unique and precisely to revive this type of display a team of students of electronic University of Hasselt (Belgium) has worked in the development or project that transforms  a CRT screen on a touch screen : “the project CRTouch”.

CRTouch is a project developed by students Dieter Meeus, Honey and Nand Truyen Truyen as a project for an electronics laboratory SoC ( System on a Chip ), ie, the development of a system on a programmable logic device such as a FPGA ( Field Programmable Gate Array ).An FPGA is a chip that consists of multiple logic blocks (logic gates) in which the designer, thanks to a hardware description language (HDL or Hardware Description Language ) describes the logical operation of the system in order to define the connections between the components that make up the FPGA chip.

In the case of CRTouch, the students used a development board based on an FPGA Altera DE2-70 and thanks to this, a glove, cables and a photosensor built their system. Considering that the functioning of a CRT monitor is in the firing of an electron beam controlled by a magnetic field, against a phosphor screen which is illuminated by the impact of the electrons that are sweeping the surface of the screen, the Students placed a phototransistor in the fingertips of a glove, and identify the impact of electrons on the screen and, by some calculations and extrapolations based on the measurement of the sensor, to estimate the position of the finger on the CRT screen.

Obtaining the position of the finger, the system mounted on the FPGA also controls the VGA monitor and a line projected onto it, for example, if the finger is sliding on the screen. In fact, by now, but you can draw on the screen and offer users a palette of colors (which has some detection problems with darker colors), but considering that is a prototype designed as course work, there to recognize the merit of the work done by these students.

Although CRTouch not multitouch and is light years ahead of the touch screens available on many smartphones market, the idea is quite original and, of course, illustrates the versatility of the FPGA.