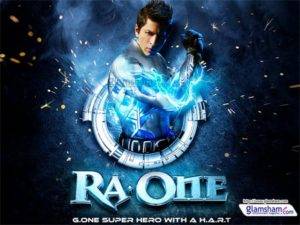 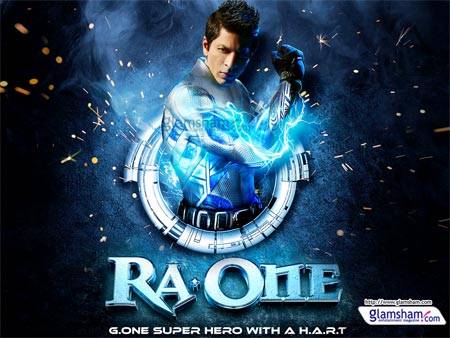 On the Indian superhero scale, G.One is still miles behind Robot. However Ra.One qualifies for a ‘one’ time watch.The film has a very cheap sense of humour and surprisingly the dialogues are vulgar for family audience.

In this science fiction flick Shah Rukh Khan’s superhero character G.One takes too long to boot, just five minutes before the interval G.One arrives which has been hanging into nothingness. And the film’s title character Ra.One, gets a face  even after the second half.
It is obviously not a ‘dream’ start for the film.Alot  of screen time is expended on vulgar jokes . The actual thrill starts only after the superhero comes into picture.

Shah Rukh Khan credibly done the G.One part though irritates occasionally. , Kareena Kapoor is never sidelined like anyother superhero film and does decent in her part.  Armaan Verma the child actor is less cute with lots of attitude. In a major part of film he carries an annoyed expression . Its title character Ra.One is another factor which works against the film because this character is not half as menacing as it claims to be. Not only Arjun Rampal inducted very late in the plot, he is too ineffective and shallow for the main villain. It is very easy  for Arjun Rampal to remain expressionless (in his mechanical avatar) throughout the film and  his dialogue delivery less perceptible due to base effect which added to his voice. In the game’s introduction, Amitabh Bachchan’s voiceover does not register. Though the film offers to Rajinikanth an apt tribute.

In the climax The local train sequence brings back memories of Rajinikanth’s Robot but the climactic mortal combat in a simulation setup is not inspiring like Robbot.Ra.One reminds of the climax  Toonpur Ka Superhero starer Ajay Devgn.The film could have been much crisper in lenght and the editing could have been better.The film was not actually shot using the 3D technology the effects are not really great .

via [The Times Of India]

Another Very Unusual Hurdle for “Heroine”!