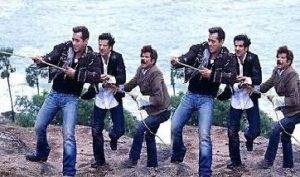 In the  upcoming  sequal of No EntrySalman Khan,  will play double role and not only salman but  Anil Kapoor and Fardeen Khan will also play dobule roles in Anees Bazmee‘s ” No Entry Mein Entry”

The actors will play multiple parts in Anees Bazmee‘s No Entry Mein Entry .  NoEntry  released in 2005 and it was one of the biggest commercial hits of the year. In that movie female leads were  Bipasha Basu, Celina Jaitley, Lara Dutta and Esha Deol

The source  informed us that when script writer  include Salman’sdouble character in the script, the filmmakers wanted to develop it with more humor  by creating  doubles roles also for Anil and Fardeen.  60% of the script is complete at  this point  and the female leads will be  finalise by  director  in about  next three weeks .14 years ago  Salman khan had  played multiple roles in a film While in the past  Anil has played a double role  in Kishen Kanhaiya a film by Rakesh Roshan’s  and for  Fardeen this will be first time when he will play double role.Multiple roles in one film are considered to be  a classic trope of Indian cinema.
Spread the love