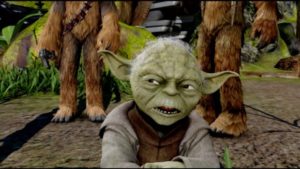 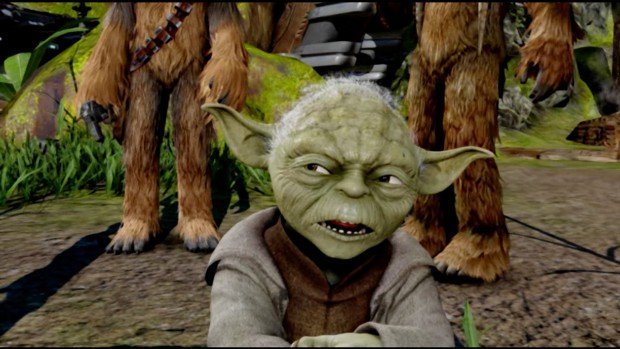 Kinect Star Wars was at E3 2011 as one of the upcoming Kinect announced games for hardcore gamers. In the test, but we quickly realized that the developers fall into the casual side of the Force.

Can even use the power of floating objects: This is probably one of the many dreams of Star Wars fans. With Kinect Star Wars players can do just that. All they need simply stretch out their hands and objectives. The illusion is very convincing. Unfortunately, that’s Star Wars Kinect not always so.

Lightsabers in combat while players can dodge, kick and strike in eight directions, yet feel the duel not sound like Star Wars. The entries must be done slowly and lazily in succession. Would a true Jedi before the Kinect sensor are located and how to move the film, it would probably happen less meaningful.

Within the campaign, players are trained by a Jedi Padawan. Initially, they defend the Wookiee planet Kashykk, later, they aim to Tie Fighter in orbit. And then there are also tours with Speeder Bike or dexterity elements with well-timed jumps.

A second player can play at any time to come and go. In split-screen movements are recognized less accurately and suffers the index.

Apart from Chewbacca and R2D2 no character is given a satisfactory German voice. C3PO, Yoda and co all sounds silly and childish. Sun is less atmosphere than in the original English version, which is also on the DVD.

In the main menu, players can also navigate through convenient voice input, and select the other modes.

In addition to the campaign is the pod-racing world championship is the most comprehensive game mode. The control pod is working very well and is accurate. By the retraction of the arms, turn left and right, special weapons or repair drones can be activated by a right or left arm stroke from the top.

The presentation of the race is managed and integrated into many details of the new trilogy. Even if the adversary A strong rubber band AI have to make race just because of the variety of fun along the course.

Another mini-game, the developers have incorporated a rudimentary dance game that proves that a lot of fun with Princess Leia Jabba the Hutt had. There she is in fact the dance champion in a total of 15 pop-Coverversongs in recent years.

The last stand-alone mode can devastate players as a Rancor planet. Here, the same criticisms apply as in the control of the campaign: For an entertaining high-score hunting with friends ranging mode in the long run, the entries are sedate but monotonous.

The new Star Wars adventure set an absolute requirement on the Xbox 360 connected Kinect ahead. That in the Microsoft Studios developed program will cost around 40 € and has a Wii release from 12 years ago.

Kinect Star Wars fans can maintain the license, a good long while. Especially the podrace and the campaign is fun, as long as players keep scrupulously to the control requirements. The presentation should be considered in parts nice and smooth.

For serious gamers still remains the connotation that Kinect Star Wars was developed primarily for a younger target group. The plot is predictable, the universe does not seriously enough, and the later passages are missing more complex input methods. Obiwan Kenobi would have probably said, “This is not the Kinect game that you’re looking for …”

Make Holograms Through Teleconferences with Kinect

Microsoft is Preparing a Windows Version of the Controller Kinect