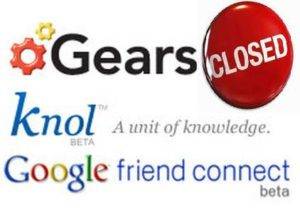 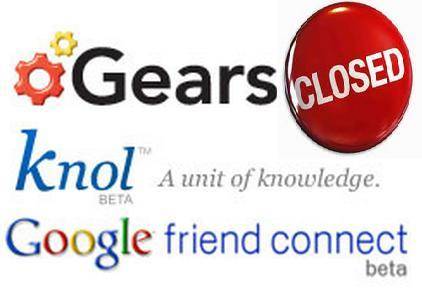 Google continues the work of “cleansing” of its services to focus resources on active projects. With the announcement yesterday afternoon, the Mountain View company has already canceled more than 20 projects, some of which are always embedded in products currently available to users.

With a post on the official blog, Google announced the cut of seven experiments that have not received much attention from the public. The service will be best known among those who has abandoned Gears , with whom he was able to use some web applications offline. The same functionality will be supported via HTML5 . For example, you can access Gmail, Calendar and Docs using Chrome .

From January 31, 2012, Google Wave will be accessible only by reading and by April 30 will be completely disabled. Google Friend Connect , used by webmasters for adding “social” to their sites, will be suspended from March 1, 2012 and replaced by similar features offered by Google + . Google will close on 19 December Bookmarks Lists , available only to users in English and used to share bookmarks with friends.

Google Search Timeline , which lets you see the historical results of a query will be replaced by instruments present on the left side of the search engine, while the graphic display will be available on Google Trends and Insights. Finally, end support for Google Knol and RE <C (Renewable Energy Cheaper Than Coal), an interesting initiative that has helped to develop low cost technologies for the production of renewable energy, particularly solar energy.