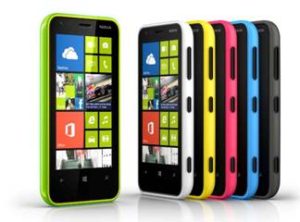 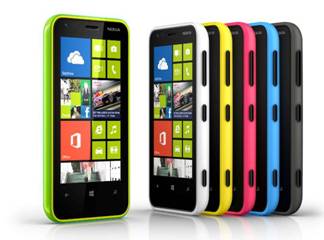 Nokia Lumia 620 is realized with a technique of staining in double layer which guarantees a range of vivid colors and a textured effect. This procedure adds to the base layer a second layer of coloured polycarbonate, transparent or translucent which giving more shades of color and a depth effect. The choice of seven different interchangeable bodies to adapt the look of the Nokia Lumia 620 to style and personal taste.

“We continue with our strategy to reach new users and markets,” said Jo Harlow, executive vice president of Nokia Smart Devices. “Thanks to the innovative design, the latest version of the Windows Phone 8 and a number of features and proprietary applications, such as Nokia Lens, Nokia Maps and Nokia Music, the new Lumia 620 smartphone is a highly competitive to the end price that fits “ .

Among the features in common with the Nokia Lumia 920 and the Nokia Lumia 820 are the exclusive photographic lenses can alter the creative 5 mega-pixel main camera of the Nokia Lumia 620 and VGA front camera. Cinema-graph lenses allow you to add simple animations to still photos while Smart Shoot creates a single shot and perfect from multiple images, even removing unwanted objects from your photo. Nokia Lumia 620 also allows access to the best maps and more complete experience of localization through the platform of Nokia Here that includes Nokia Maps, Nokia Drive, Nokia Transport and Nokia City Lens exclusive. This application provides information about the places surrounding buildings framed by viewing them on the camera’s viewfinder. 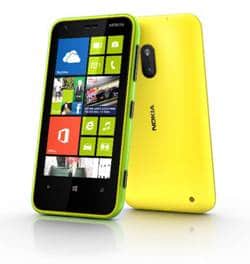 Nokia Music , the application that allows you to easily discover and listen to new music send free streaming music tracks is now with no advertising or requests for registration or subscription and with the ability to download playlist for the off-line mode.

Thanks to support NFC , Nokia Lumia 620 can be used in conjunction with other accessories enabled the same technology as the JBL PlayUP Portable Nokia. The NFC connection is open and secure  which allows you to share and receive content by connecting to compatible devices or make payments securely using the application Wallet available with Windows Phone 8. With this operating system, the Nokia Lumia 620 smartphone delivers an even more personal. I Live Tile modified are updated directly on the home screen.

Contact The Hub brings together in one place all the information of various categories and social networks, allowing you to stay in touch with friends easily and create Groups or Private rooms for the shares. The Tile I can post an update, set the status of the chat, read the latest news and check your Facebook,  LinkedIn and Twitter notifications.

Windows Phone 8 also includes Xbox Live, Microsoft Office, 7 GB of online storage SkyDrive and allows for faster and safer browsing through Internet Explorer 10. These features and functions are supported by the processor of Qualcomm Snapdragon ™ S4 Plus.

“People can do pretty much what they want when choosing a mobile device with Qualcomm Snapdragon ™ processor,” explained Enrico Salvatori, Senior Vice President and President of Qualcomm Europe. “processor Snapdragon ™ S4 Plus is the heart of the Nokia Lumia 620 which allows multitasking, HD streaming and sharing content at extremely high speeds. “ 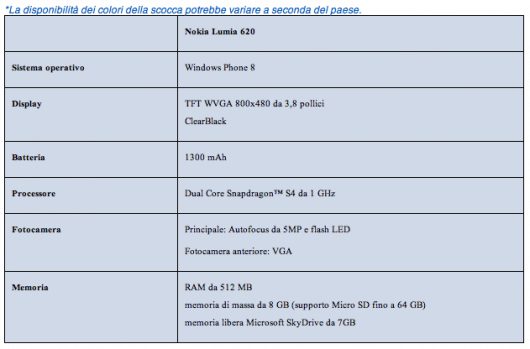