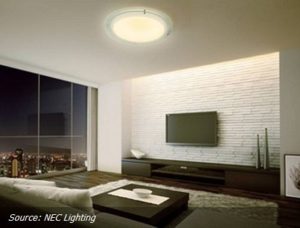 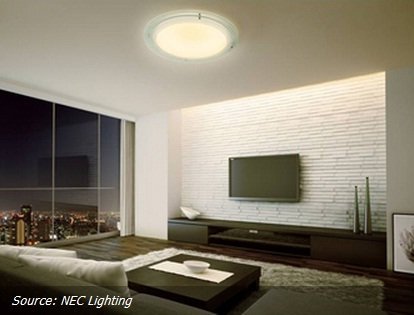 NEC Lighting division unveiled a prototype overhead LED-lighting system with integrated wireless speaker. The system is controlled using a smartphone, which established a special application under the platform Google Android.For wireless transmission of music from your phone uses the protocol Bluetooth.

In addition, the application allows you to control various aspects of the lighting system, including the brightness of the lamp and its color temperature. In addition, the developer announced the ability to create various special effects, combining the output of light and sound.A company representative said that such lighting systems are typically installed in the center of the room, making them look more impressive.Once installed in the center of the room, this system allows the sound and light to disperse throughout the room, completely filling the space, and output controls on your smartphone makes work more comfortable, because mobile gadgets today are becoming more popular.

During the demonstration, the developers of the system showed three basic modes of operation, combining the synchronized light and sound. The user can select between “Active”, “Nature” and “Relaxation”, depending on its current status and mood.

NEC Lighting Engineers continue to actively develop a system to release it on the market later this year. The prototype was made in a wooden box, but to enter the commercial version of the designers will prepare a number of other options – it will be cutting-edge acrylic panels, the version in the traditional Japanese design, as well as an extremely simple and, in fact, universal spherical hybrid fixtures. The estimated cost of innovation systems has not yet specified.