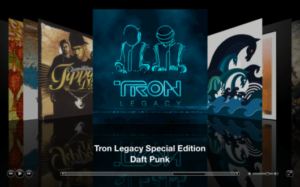 Cover flow: was the predominant feature of iTunes 7 in 2006. This has allowed us to put the album in “flow” all together, allowing you to switch between them with a nice animation. Apple has completely abandoned the idea of Cover Flow in iTunes 11 to propose a new system more similar to the “Folders” of iOS. Cover Flow function, however, remains on the iPhone and iPod.

The de-duplication:  Organizing the music you can come across some duplicated in your library. By default, iTunes does not allow you to re-add another music file if it is already existing, but sometimes we can have two different files for the same song, rising up in this problem. Already with iTunes 10.7 and earlier, Apple had made available a tool that can recognize duplicate and place them in a single page. In iTunes 11, this function is no longer present.

iTunes DJ:  A function that allowed us to put together a long list of songs in a single touch. We also had the ability to change tracks to avoid reproducing someone a little ‘awkward in the library, limiting the selection to a certain playlist or to a certain genre. The funny thing also, was the fact that during a party, for example, could be invited to apply for a particular song, adding it to the playlist from their device and also rate it, making it more social! In iTunes 11 this is no longer possible.

Multiple windows: one of the favorite features was represented by the users the ability to open multiple windows which is very useful, especially if you want to do a little ‘multitasking like listening to Internet radio while playing a playlist, all while keeping the two separate actions. Similarly, with iTunes 10 AppStore was possible to navigate in a separate window compared to that of the management of the iPhone. Now this is no longer possible and we are limited to a single window in which everything happens. To go to the App from the management screen of the iPhone, we click the “Finish” button, closing it completely.

iTunes Sidebar: Apple has removed the right sidebar, which contained recommendations Genius. Basically, when you play a song, in this bar could know other songs “related” present on the Store. It was therefore possible to make the purchase and passionate about new music soon discovered. With iTunes 11 instead, the Genius recommendations have remained but are linked exclusively to the songs in your library. It ‘just click on the arrow next to the title of the song playing and then select “Start Genius” and put in play list all related songs using Genius. It will not however suggested more music for sale through the Store.

The only way to get new music based on the songs related (which Apple gets based on the purchases made by multiple  different clients ) is to go to the display system “Album” and click on the “In Store” to view the fourth column just what we are looking for .. a system far from intuitive, compared to the previous right sidebar, which displayed more precise results and related to their  tastes  (Genius) in a totally automatic and not on demand.

Mini player: mini player introduced iTunes 11 allows us to start a search, and view album art. You are missing a few things like the ability to quickly adjust the volume with a knob at hand and the progress indicator that shows to what extent it’s track. E ‘can still view this information but with some more action like click on the icon Air or play through the album cover.