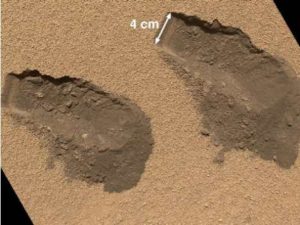 Curiosity which is the Mars rovers by NASA has taken a first soil sample at a location in Cale craters. It contains dust and sand, and analyzed . It Collected a “complex chemical” sample, containing among others water, sulfur and chlorine-containing substances. The soil samples were heated to 800 degrees Celsius, and analyzes the exiting gases.

In contrast to reports that spoke of something sensation discovered in organic compounds. Compounds have been discovered that are “halfway normal volcanic minerals and the other half non-crystalline materials such as glass.” In addition to oxygen and chlorine from the meter SAM chlorinated methane compounds were analyzed. The chlorine comes from Mars, the carbon compounds could be from the earth and was brought from his Curiosity but they could also be caused by the heating. Otherwise, they could be an indication of microorganisms.

As always, when Mars is speculated whether there is life or has been. The rover can explore with his instruments is not life but most laboratory evidence of life. Even if the carbon compounds should really from Mars, it is far from certain that they are evidence of organisms. The scientific director of the mission, John Grotzinger, urges for restraint: “There will be no Hallelujah moment,” he says and points out that patience is required.

After media had played up one of his remarks a few weeks ago, Grotzinger made it clear that the analysis of the soil sample did not bring any major discovery with him and thus no evidence that it is on Mars is evidence of the basics of life. They have not only analyzed a further noteworthy piece of dirt which was done more for the reason to test the instruments, close as discoveries. Similar mineralogical compositions were already found by Spirit and Opportunity.

Curiosity and the Rock on Mars Never Seen Before