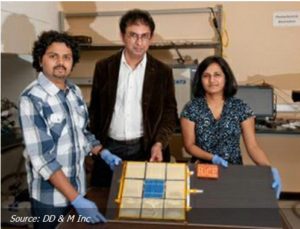 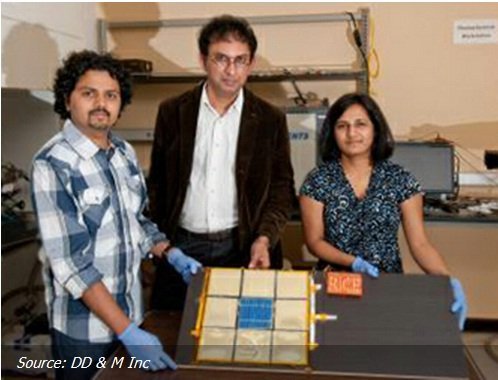 The staff at Rice University have invented a new kind of energy source: it looks like a normal spray air freshener spray, but inside is a lithium-ion battery in a liquid form.

The battery can be applied as a paint on almost any surface and can withstand a certain number of recharge cycles. “Paint” from the spray, when applied to the surface, is distributed in the same layers that are present in the usual lithium-ion battery, including anode, cathode and separator polymer. As proof of performance of such unusual cells, scientists conducted an experiment in which the “colored” surface within a few hours fueled the words “Rice”, lined with a few light bulbs.

According to portal CNET, based on the words of the developers. Spray the battery at the current stage of development can withstand up to 60 cycles of charging and discharging, and then gradually begins to lose its capacity of up to complete loss of efficiency.Investigating the invention, the staff at Rice University applied it to a variety of surfaces – tile, flexible polymers, glass and stainless steel. Plus, the article points to the official capacity of the battery to store and release energy, as applied to the earthenware mug, which opens up the possibility of creating samopodogrevayuscheysya dishes.

Specialists intend to continue working on his creation in order to improve its performance. They have set themselves two hard to reach, but still very real purpose: first, they increase the amount of materials that are able to work a new spray-battery, and then attempts will be made to increase the number of cycles of charging and discharging.

The commercialization of this development, analysts say, will help humanity to move much more quickly to renewable sources of energy: a thin layer of paint, batteries will use it in residential and office space for feeding electrical engineering, and collect a charge in the battery will be solar panels. Thus, the level of electricity consumption will be reduced by several times.

We also add that in an experimental version of the spray-battery used the following materials: lithium cobalt oxide as the cathode, a lithium-titanium oxide as the anode and the gel electrolyte (separator). Also, copper was involved – she served as current collector.

Apple will Charge Your Gadgets with Hydrogen Fuel Cells