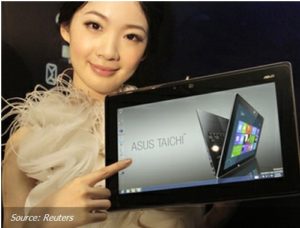 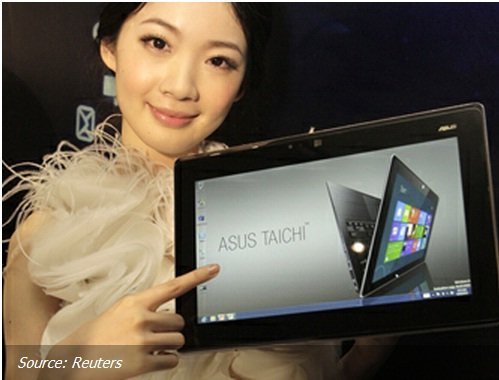 The first day of the event, it familiarized the audience with a device called Taichi and Transformer Book – a hybrid, resulting from the symbiosis of the Tablet PC and ultrabuka.

ASUS Taichi is by far the concept, although it is very promising. The device looks like a laptop, but he has one feature – just two full-touch screen. One of them, based on a matrix of professional IPS, located at its regular place, and the other serves as the top cover. Thus, this is a laptop, and tablet PC at a time.

According to GadgetFolder, ASUS Taichi planned to produce in two versions – with screens of 13.3, and 11.6 inchesdiagonally, supporting the resolution Full HD. Computer equipment is very rich – CPU Intel Core i7 series of Ivy Bridge, 4 GB RAM, SSD-drive, two cameras, a lot of video output, and advanced interfaces. The thickness of the hybrid will be the same as that of ultrabukov, that is no more18 millimeters.

ASUS Transformer Book – this is a classical solution, at least, something like a Taiwanese manufacturer is already there. Initially, the device is a Tablet PC, but at the lower end of its case there is a special interface to connect the docking station. She carries a battery, electronics, and more ports and a full QWERTY-keyboard that turns the handheld into the laptop. Transformer Book Tablet, ASUS will offer three versions – from 11.6 -, 13.3 – and even 14-inch screen. All of the interior of this model is completely taken from the conceptual Taichi.

The value of their innovations, ASUS prefers not yet discussed, assuming that the time had not yet arrived. The devices will be available no earlier than the release of Windows 8, and that, we recall, was released in October or November.

Eight Interesting uses of the Tablet in the Kitchen