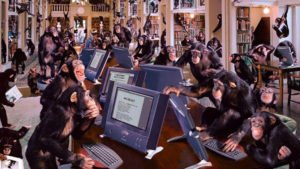 New research suggests that Monkeys are able to type paras of the Shakespeare play “Hamlet” with brain implants.

The research also declares that monkeys type speed remained up to 12 words per minute, with fewer typos than past brain-computer interfaces. It is a good news for human-beings as the new brain implants technique will result to improve the life level of many completely paralyzed persons in near future just like genius scientist Stephen Hawking. 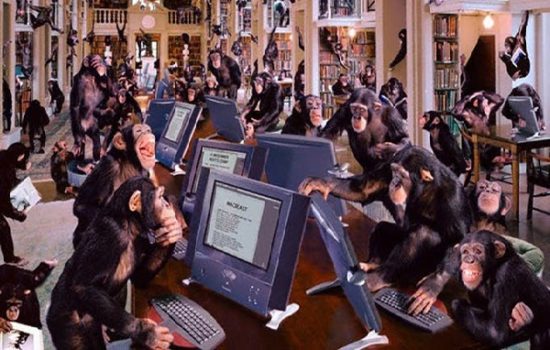 Study co-author and bioengineer Paul Nuyujukian, going to join Stanford faculty as an assistant professor next year, told the world;

Our results demonstrate that this interface may have great promise for use in people,” “It enables a typing rate sufficient for a meaningful conversation.

Monkeys have already proved that they are the most genius and intelligent animals after social animals called humans. They have showed their intellectual level and brain powers by  controlling prosthetic arms, driving robotic wheelchairs, controlling each others’ minds in past researches. Even in some case studies they exhibit how to type words though their typing speed was quite low. However, in all such kind of past experiments the communication systems were extremely too slow than natural pace of conversation.

At present, there are many communication systems and software available for paralyzed persons to ease their lives. Stephen Hawking uses a device which converts the movements of his facial muscles into his thoughts and then into sound to communicate with other while some software depend upon the eye-tracking technology for the people who are paralyzed and are unable to communicate. But facial or eye tracking technologies are so expansive and are time-taking even these can’t help the patients who have severe paralysis problems as said by the researchers.

So to resolve this issue, bioengineer Nuyujukian and his team implanted multiple electrodes inside the brains of two rhesus macaques. They succeeded in teaching the  monkeys to type each letter with a specific prompt. It is a matter of common sense that when a typewriter and papers are provided to the monkeys they could type the entire novels of William Shakespeare but only by random chance, but the latest research focuses the  more targeted results.

The team then prompted the monkeys one letter at a time to type the famous “To Be or Not to Be” speech from “Hamlet,” as well as snippets of newspaper articles from the New York Times. The monkeys were able to type at about 12 words per minute — certainly not as speedy as the best typists but fast enough to sustain conversation, the researchers reported Sept. 12 in the journal Proceedings of the IEEE.

This new brain-computer interface technology has many future prospectus though they way the people try to communicate in busy environments, could result into delays for the system to work.

What we cannot quantify is the cognitive load of figuring out what words you are trying to say.We’re not using auto completion here like your smartphone does where it guesses your words for you.

The team also hopes that they can overcome  the relatively slow typing speed as there are ways to offset the speed limitation which could speed up the system.

And it should be also appreciable that the researchers found no side effects or brain abnormalities over long period in the monkeys involved in this project. Moreover brain implants can safely work for about 04 years  without any damage.

This new brain-computer interface technology is being implied and tested over patients at clinical trail level and results are encouraging so far.