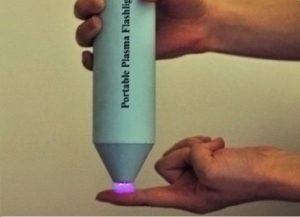 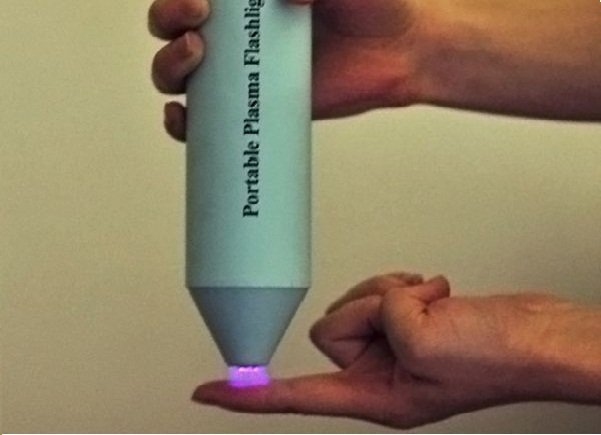 High technology in a strange way treading water when it comes to the most simple things. Toothbrush exist unchanged for several decades, the soap has not changed a couple of centuries, and towels, it seems, have not been modernized since the days of William the Liberator. It’s nice when the best minds in the world are beginning to work in this direction.

A group of scientists from Australia and China has built a prototype of a portable generator cold plasma. It looks like a large flashlight, powered by a 12-volt battery and requires no gas supply or an external high voltage power supply.

The new unit is designed to disinfect anything – such as the hands. The generator generates electric discharges duration of 100 ns and a frequency of 20 kHz. These discharges produce in an ordinary room air plasma with a temperature of 20-23 ° C (where the machine is equipped with a fuse, not allowing the temperature to rise above). A stream of such a plasma does not cause any harm to the skin, but to effectively fight the bacteria.

To test the device, the authors have grown on the substrate is almost 30-micrometer-thick film of bacteria Enterococcus faecalis. It consisted of 17 layers of microbes. Within five minutes of exposure apparatus plasma penetrated into the lowest layers of the film and successfully inactivated all organisms. And for some of their species, the developers add a “flashlight” would be enough and a few tens of seconds of the generator.

The authors of the device claim that mass production of such a generator would cost less than $ 100. The editorial staff of our program discusses the rapidly incoming news. Somebody is glad that at long last be able to wash their hands of the plasma jet – it sounds very cool. Some people dream of the original dishwasher, destroying the bacteria in a few minutes. Remembered and disinfection of surgical instruments – it is also important. But the most profound thought expressed by our editor in chief, he would really like to install a plasma in an apartment shower. It can be very useful during the traditional annual two-week holiday shutdown of hot water. But we believe that a hundred years this national tradition is completely eradicated.

Amazing Umbrella With an Antenna, a Flashlight and Charging.

iPad 3 Haptic Display as “We Have Something You really Have to See. And Touch”