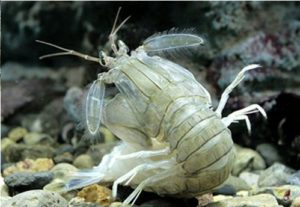 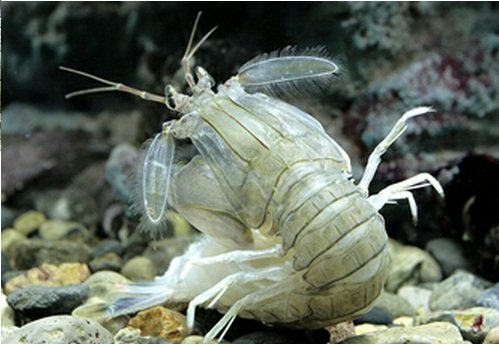 Limbs tropical cancer, which he divides the shells of mollusks, can withstand tremendous loads. The leadership of the U.S. Air Force hopes that their study will create a new type of armor.

Crustacean of the order stomatopods prompted scientists to the idea of ??a new armor, light and high strength. The results of studying the microstructure of shock invertebrate limbs were published in the journal Science.

Stomatopods are also called crayfish, mantises because of the peculiar structure of their thoracic legs. One group of these animals is at the end of the second pair of thoracic limbs, pointed segments. They pierce their prey crabs. In the other group to which the tropical shrimp Odontodactylus scyllarus, which became the subject of studies, segments of the second pair of thoracic legs are thickened in the form of a hammer. This breaks the hammer Odontodactylus hard covers mollusks and other crustaceans.

Hammers cancer withstand great strain. The speed of their movement in water is 23 meters per second, higher rate of small-caliber bullets. For the life of his limbs cancer-causing hammers, a total of more than 50,000 hits. Impacts of cancer-mantis is so strong that researchers in his lab have got a special tank for fear that the cancer can break glass.

Scientists have found that covers the hammers are made up of three zones with different microstructure and chemical composition. The outer zone is formed by hydroxyapatite crystals, oriented in a certain order. Hydroxyapatite is also part of the bones of vertebrates. The inner zone is lined with layers of mineralized chitin, which lie in different directions, which gives it a layered structure. Finally, the lateral zone is also composed of chitin fibers, fastened the entire hammer.

The structure of the hammer allows it to effectively absorb shock, while not breaking down and cracking. Researchers hope that studying the structure of the limbs of cancer will help them develop a new type of armor. Under these objectives they have already received 590,000 dollars from the Research Center of the Air Force United States.

Human Tears Will Help to Diagnose Cancer at Early Stage

Scientists Confirmed the Activity of Aspirin Against Cancer