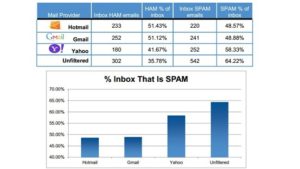 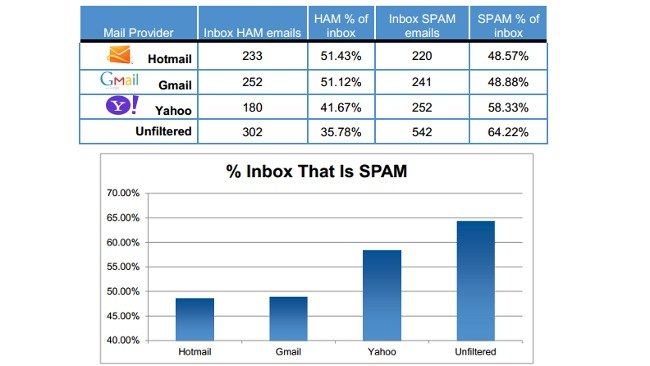 Hotmail is no longer the same as a few years ago is something that is clear. Yesterday, it was made public the results of a study by the company Cascade Insights (commissioned by Microsoft) in which one can observe that, by a few tenths, Hotmail spam filters better than Gmail .

The study in question did so as follows: set up accounts with the same username in the three services studied (Hotmail, Gmail and Yahoo) and a fourth account in filtrate without a hosting provider. Then the comments posted on blogs and Facebook and register with them for a hundred sites suspected of being a source of spam.

The study lasted five weeks . In the end, 48.57% of the emails that were in the Hotmail inbox was spam, in Gmail, the percentage was 48.88% and 58.33% of Yahoo. As we see, the difference between the three is not very large, especially between Hotmail and Gmail. In the case of the account without filtering spam increased to a 64.22%.

The remainder of post is what the people of Cascade has called “Ham” legitimate business and e-newsletters. Figure that tops these lines you can see the full details.

The responses of each service

Reactions to the study was not long in coming. The biggest loser in it, Yahoo has said that, according to them, 99% of spam is blocked and that the study may be influenced by the methodology . It notes the good result obtained by a 2010 study by the Fraunhofer Institute.

As for Gmail, the reaction has been lukewarm, noting that factors such as false positives are difficult to measure in studies by outside companies. But Microsoft has claimed victory, of course, with a post titled “Not surprisingly, the Hotmail spam protection is the best in the business” .

But if Hotmail is better than Gmail and Yahoo, I think what the study shows is that the Microsoft Mail service has improved considerably compared to what was in the past . The differences found may change in the daily management of each user makes their own and are not so high as to make a substantial difference.

There is no doubt that all three are high-quality services, especially when Hotmail and Yahoo have been improving their characteristics after becoming stuck with little time to evolve. The study data fail to tip the balance significantly, although beneficial to Microsoft for advertising purposes.

Sure some of you have accounts in several of these services at the same time. As for me, regularly use Gmail and Hotmail and sometimes the truth is that both services are at par on the subject of spam: quite efficient. What about you? How is your experience with spam filtering?