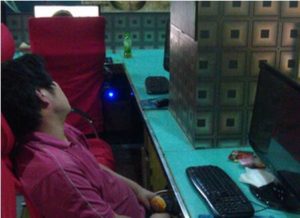 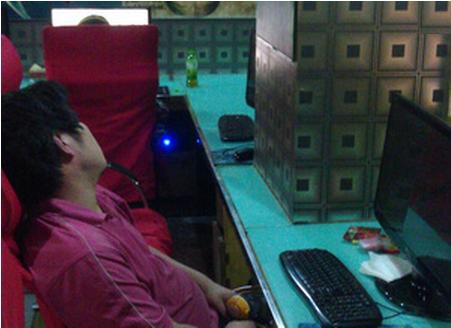 Live in China, known as Van, spent two months in an internet cafe, mining virtual gold in the online game World of Warcraft. This occurred in Wuchang, a city of Wuhan, Hubei Province.

Over eight weeks, 23-year-old lived, ate and slept in the local internet cafe. When visitors to the prison authorities and drew attention to him and asked what he was doing, Wang said, “I dig for gold.” His story first appeared in the pages of the Chinese online conferences, and then the character became interested in local online news portal Tencent. According to this publication, gamer moved the car number 76, he really slept, ate and lived in an internet cafe.

Moreover, witnesses emphasized that in all the past two months, Wang never bathed and changed clothes. As might be expected, as a result of this neglect of personal hygiene, the smell from the visitor was very unpleasant, and even so disgusting that other customers refused to sit at the computer near it. Other visitors and members of the staff tried to persuade Wang to take a break and relax from the “production”, but he flatly refused.

Internet cafe owner said the guy pays for the computer regularly, and there is no reason to refuse the service or force them to leave the cafe. Edition Tencent says Wang spends so much time in the World of Warcraft is not to train their gaming skills and purposeful collection of game resources and artifacts, which are then sold to other players for real money.

At the same time, people are seriously concerned about the health of young people, because some similar incidents earlier ended in failure. So, in 2005, the Chinese teenager committed suicide on the basis of attachment to the game World of Warcraft. And last summer, a young man from Taiwan died, losing in the Diablo III 40 hours without a break.