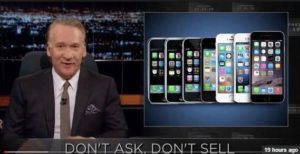 Bill Maher, the famous host of HBO’s popular weekly fun show”Real Time with Bill Maher” goes wild and makes fun of Apple’s new iPhone 7 by saying that only Apple shareholders are eager to convince you for buying the new smartphone just launched by Cupertino company. He also insulted the people who stand in “Nerd Line” for hours to buy new iPhone 7. 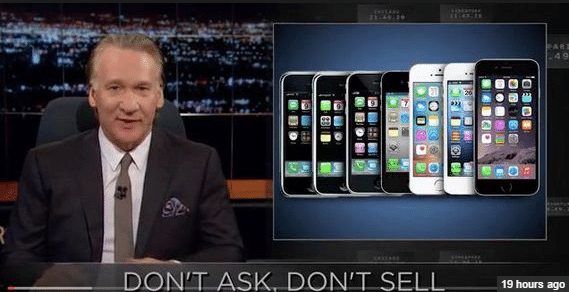 Though Apple and its lovers are quite happy on release of new iPhone 7 and many technological experts believe that iPhone 7 is the most efficient, fastest and enriched smartphone ever launched by any company, yet Bill Maher is absolutely not convinced and in his opinion iPhone 7 is a dull iPhone without any attractions for “True iPhone” lovers. He raged Apple on releasing such kind of “Nasty” iPhone instead of releasing a “Nifty” one.

In spite of iPhone 7 Plus’s dual camera and innovative AirPods still Bill Maher stands with those ones who take the new iPhone 7 as a “Business Trick” by Apple for gathering millions of bucks from his lovers.

On Friday’s “Real Time With Bill Maher” ; the host advised Apple to not to release any other iPhone in future for god sake.

The only people who really need you to get a new phone every year are the shareholders.

He hinted out that Apple knows the fact people will never buy a “NEW” iPhone with “OLDER” look and features. Also, people now take iPhone as a symbol of status, style and prestige. So Apple makes them fool by selling old wine in new bottles.

Maher commented he is well aware of the thoughtsof the people on the nerd line;

Bill Maher also told the audience that Apple’CEO wants to get growth at any cost as their shareholders desire like the same way.