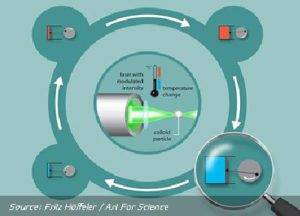 German engineers have created the world’s smallest steam engine, proving the laws of thermodynamics efficiency at both on the macro and micro scales. 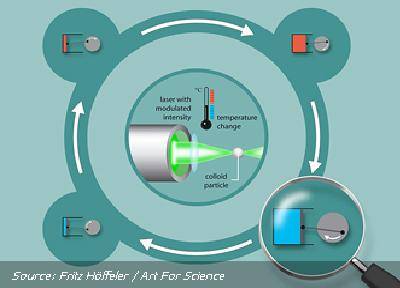 To solve such a difficult task was applied by virtue of scientists from the University of Stuttgart and the Institute of Physics of Complex Systems at the Max Planck Society.Technologies and techniques that work to create macroscopic machines may not work in the design of similar devices at the micro level. A team of researchers led by Clemens Bechingera managed to circumvent these difficulties by implementing the principles in a compact car, working in all heat engines.

We have created the world’s smallest steam engine, to be precise – the Stirling engine, and realized that the machine really does the job- explained Bechinger.

Stirling engine – A typical representative of the external combustion engine in which liquid or gaseous working fluid is moving in a confined space. In a heat engine, developed almost 200 years ago, Robert Stirling, placed in a cylinder of gas, cooled and heated, it shrinks, then expands. This causes the piston is located above it to do work, for example, rotate the wheel.

We have successfully reduced the size of the main parts of the engine, such as working gas and the piston to the size of several microns, and gathered them out of the car,” – said co-author Blikl Valentine.

Instead of working fluid vapor in the Stuttgart heat engine has a single plastic bead diameter of three micrometers, which floats freely in the water. Since this particle in the tens of thousands of times larger than the size of an atom, it is involved in Brownian motion, scientists can observe its behavior under the microscope.Piston, through which the steam engines working fluid does work, the engineers replaced by a focused laser beam, whose power can be changed. The impact of fluctuations in the laser controls the ball just as the piston compresses the gas in the cylinder or increases its volume. The source of heat in the car is another laser beam, which heats the water with the ball.

Our experiments allowed to take a fresh look at the transformation of thermal energy into mechanical energy at the microscopic level, and paved the way for the design of micro-mechanical machines of the future”, – the creators of the engine in a paper published in Nature Physics.

The Problem of Dirty Fingerprints on the Touchscreen is Almost Solved