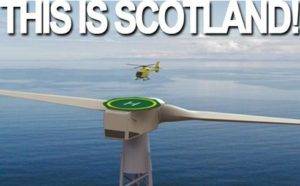 Scotland has an ambitious and admirable plan, managed to feed 100% renewable energy. The government adopted an offshore test site for a new 6 MW wind turbine plus Landing Facility of Helicopter, that will Used in case of Emergency  land. 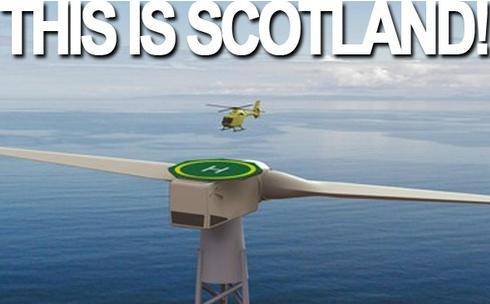 There is plan to to use the top 0f blades as helipad for emergency landing of Helicopters.This is really Innovative idea but the results of Experiments will  show that … Is it the Right Place to Land the Helicopter ?

About 2-B Energy, based in the Netherlands, has permission to install an innovative two blade wind turbine, about 20 feet off Methil in Fife, according to Energy Minister of Scotland, Fergus Ewing. The 2-B is one of the many companies that participate in a program that aims to build pilot wind farms, for the investigation of their capabilities.

The amount of energy that will be produced for local use, while Ewing argues that such moves will help the country to achieve a green economy, low carbon emissions. The 2-B, was originally to fit two originals, but only one is approved. As part of an island, Scotland is quite suitable for the development of offshore wind farms, and of course the development of green energy sources that are understood by the most welcome projects, I think by all.

Board of Imagination to Control a Skate Through Brain Waves (Video)

iPoo – A Toilet for the Fans of Android